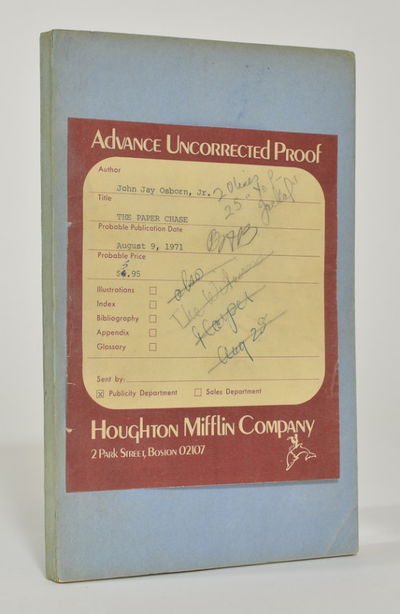 by Osborn, Jr., John Jay
Boston: Houghton Mifflin Company, 1971. First edition. Near Fine. An "Advance Uncorrected Proof" copy in blue paper wraps with a Hougton Mifflin label tipped on the front cover with the expected publication details. Additional notes in pencil and pen that appear to have been made by someone on the editorial staff. A Near Fine copy of the book with a small crease on the front corner and wraps slightly toned, otherwise in excellent condition. Pages numbered 1 - 165 (trade edition ends on page 181), with variations in layout and preliminary pages, and possibly other changes too.

In the third year of Harvard Law School, John Jay Osborn, Jr. crafted this novel based on his own experiences within the pressured environment of Harvard Law. The main character, Hart, is an aspiring lawyer from Minnesota who becomes obsessed with the work of his professor, Charles W. Kingsfield. Not only is the book good, but as The New York Times noted, "the astonishing thing is that he was able to do it at all." The Paper Chase later inspired an eponymous television series and film, which garnered an Oscar for John Houseman's performance as the inimitable (though often attempted) Professor Kingsfield. Near Fine. (Inventory #: 1550)
$1,250.00 add to cart or Buy Direct from
Whitmore Rare Books
Share this item

Harry Potter and the Sorcerer's Stone

New York : Arthur A. Levine Books - Scholastic , 1998
(click for more details about Harry Potter and the Sorcerer's Stone)
View all from this seller>