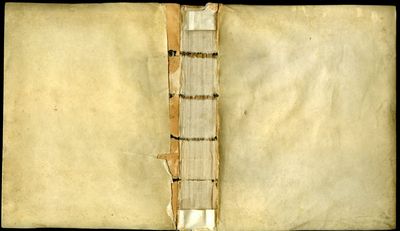 by Morin de Villefranche Jean Baptiste
1902. Hardcover (Vellum). Good Condition. Full contemporary vellum, spine perished, tears to vellum on rear cover, binding still generally sound. Paper uniformly browned, a few small tears to page edges, fine otherwise. A 1902 manuscript translation of books 22-24 of Morin's 1661 Astrologia Gallica into French. 315 leaves written on one side with a detailed table of contents. (12), 315pp. Signed Etienne Dercaisay(?) and dated May 22, 1902 on the final page. An opponent of Gallileo (and Descartes, among others), Morin wrote the 26 books of the Astrologia Gallica but did not live to see them published (he died in 1659 and they were published in 1661). The early books provide the theoretical basis in theology for his work, while the later books discuss natal, judicial, mundane, electional and meteorological astrology. Pieces were translated into Spanish in the 19th century and French and German in the early 20th including book 21 into French in 1902, a French translation of book 25 was done in the 1940s and other books appeared in English beginning in 1974 (including book 21, published by NY City bookseller and astrologer Zoltan Mason - this book, though unmarked, is from his collection) and then a series of translations into English starting with book 22 in 1994. Size: Octavo (8vo). Quantity Available: 1. Shipped Weight: 1-2 kilos. Category: Science & Technology; Magic, Paranormal & Occult. Inventory No: 045866. (Inventory #: 045866)
$750.00 add to cart or Buy Direct from Pazzo Books
Share this item

The British Housewife: or the Cook, Housekeeper's and Gardiner's Companion

London : S. Crowder and H. Woodgate , 1756
(click for more details about The British Housewife: or the Cook, Housekeeper's and Gardiner's Companion)
View all from this seller>