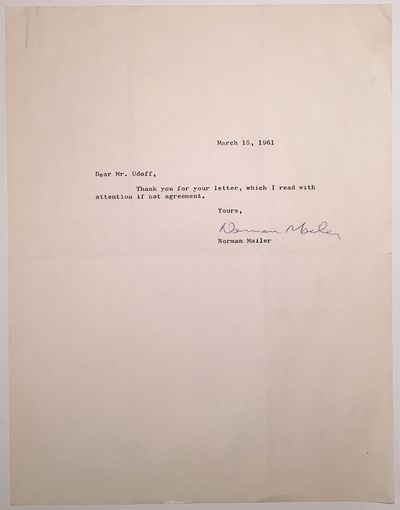 by MAILER, Norman (1923 - 2007)
1961. unbound. 1 page, 11 x 8.5 inches, no place, March 15, 1961. Written to fellow novelist and playwright Yale Udoff, in full: "Thank you for your letter, which I read with attention if not agreement." Note: the desirability of this letter lies in the fact that the author has signed his name in full. The majority of letters that are for sale are usually signed "Norman." Natural folds and a paperclip impression in the upper left corner, but still in very good condition. American novelist, playwright, and political activist. His best known works include The Naked and the Dead, The Executioner's Song and Armies of the Night. (Inventory #: 265829)
$200.00 add to cart or Buy Direct from
Argosy Book Store
Share this item