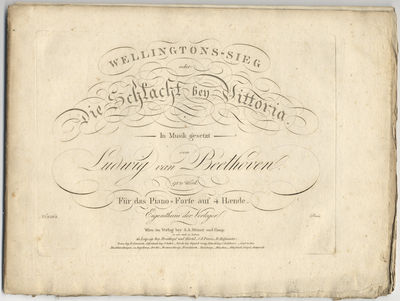 The arranger of this version is not known.

"Beethoven's 'Battle Symphony,' more correctly entitled Wellington's Victory of the Battle of Victoria (op. 91), came into being as the result of an idea by Maelzel that Beethoven should write a work for his latest invention, the panharmonicon, a sort of mechanical orchestra. The timing coincided with Wellington's defeat of Napoleon in 1813... It is a programmatic piece for a large orchestra with a battery of military and Turkish percussion instruments, including cannons and muskets. The first section opens with an English bugle call followed by the patriotic tune Rule, Britannia, answered by a French bugle call and marching tune, known in Britain as For he's a jolly good fellow. Then comes a depiction of the battle. Part 2, called 'Victory Symphony,' begins and ends with martial music but is otherwise based largely on the British national anthem, which is treated fugally." Cooper: The Beethoven Compendium, p. 220. (Inventory #: 26784)
$935.00 add to cart or Buy Direct from
J. & J. Lubrano Music Antiquarians
Share this item