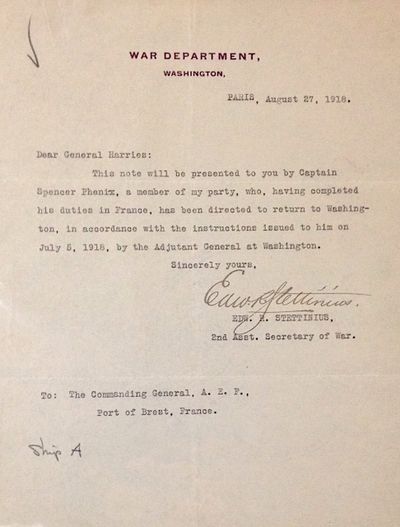 by Stettinius, Edward R.
Paris: the author, 1918. 8.5x11 inch sheet of War Department letterhead with typed body, signed by Stettinius in his role as second assistant Secretary of War. Main text reads "Dear General Harries, This note will be presented to you by Captain Spencer Phenix, a member of my party, who, having completed his duties in France, has been directed to return to Washington, in accordance with the instructions issued to him on July 5, 1918, by the Adjutant General at Washington." Phenix went on to become a Foreign Service officer; he helped draft the 1928 Kellogg-Briand pact renouncing war as an instrument of national policy. (Inventory #: 201807)
$45.00 add to cart or Buy Direct from Bolerium Books
Share this item