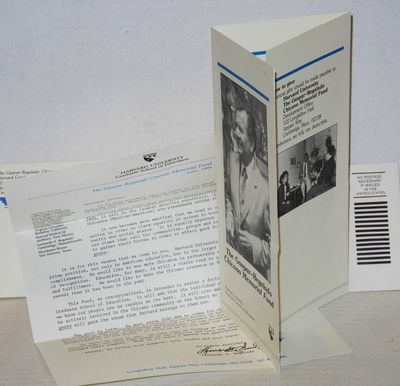 by Regalado, Leonardo S.
Cambridge: Harvard University, 1985. Press materials concerning the Memorial Fund at Harvard including a six-panel glossy brochure folded to 4x9 inches featuring a cover photo of Andres Vasquez Gaspar and 4 other photos and the Eagle symbol of Aztlan (most familiar as the flag of the UFW) history, purpose, committee members, donation guide etc., the letter is on Harvard letterhead, folded twice with a six-paragraph request for donations, also included are a donation postcard and envelope and the original envelope. Named for a Chicano who worked tirelessly to enable his brother to complete his doctoral at Harvard, the fund enables a Chicana or Chicano student to do their doctoral work at Harvard. (Inventory #: 201798)
$25.00 add to cart or Buy Direct from Bolerium Books
Share this item