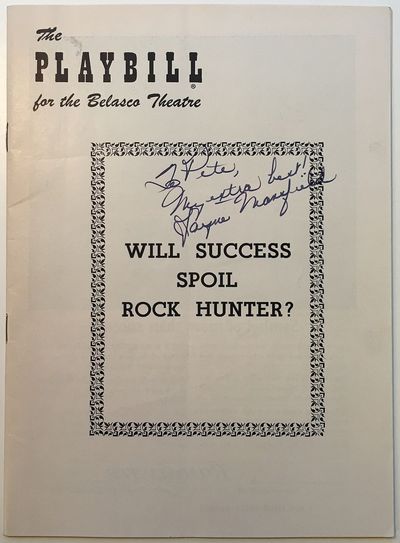 by MANSFIELD, Jayne (1933 - 1967)
New York, 1956. paperback. Original Playbill, inscribed and signed on the cover during her tenure in "Will Success Spoil Rock Hunter" at The Belasco Theatre, February 11, 1956. Boldly signed in fountain pen "To Pete, My extra best! Jayne Mansfield." Accompanied by the original box office envelope with the ticket stub to the above performance. Near fine condition. American actress in film, theatre, and television who was killed in an automobile accident at the age of 34. (Inventory #: 265870)
$400.00 add to cart or Buy Direct from
Argosy Book Store
Share this item