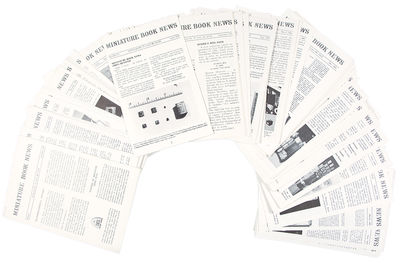 by [MINIATURE BOOKS] - Julian I. EDISON, editor
St. Louis, 1993. 78 consecutive issues, 8vo. Stapled self-wrappers Scarce newsletter issued by miniature book collector and scholar Julian Edelson. "The purpose of MBN is intended to be as broad as possible. It is hoped that MBN will be a source of information to a growing world-wide group of minibook collectors and publisher's and to librairies and booksellers" (Number 1). The newsletter continued to issue 134, ceasing publication in 2007. [together with:] [MINIATURE BOOKS] - Yolanda CARTER. Amistad Courier. A Newsletter about Miniature Books for the Dollhouse [No. 1 through No. 24, with supplements]. Austin: Amistad Press, [1980-1984]. Loose sheets, as issued. Provenance: Ruth Adomeit. The present complete set was reprinted by Carter in 1984, including a general title and index. Within an envelope addressed to noted miniature book collector Ruth Adomeit. [and:] [MINIATURE BOOKS] - J. D. HENDERSON, editor. News-Letter of the LXIVMOS. Brookline, MA: [1927-1929]. 16 (of 21) issues, 8vo. Publisher's wrappers or self-wrappers. First edition of a near-complete run of a very rare reference periodical on miniature books. Comprises issue Number 1, and issues 7 through 21 of the newletter of the LXIVmos [64mos] Club. A facsimile edition was published in 1968, though the original parts are rare. [and:] [MINIATURE BOOKS] - Valentine J. POSKA. Microbibliotrivia 5: A Fifth Curious Adventure in Miniature Books. [San Antonio, TX]: 1989. 4to. Plastic comb binding, navy blue covers, paper onlay on upper cover. (Inventory #: 30769)
$650.00 add to cart or Buy Direct from
Donald A. Heald Rare Books
Share this item
Donald A. Heald Rare Books
Offered by