REPORT OF THE CASE OF EDWARD PRIGG AGAINST THE COMMONWEALTH OF PENNSYLVANIA. ARGUED AND ADJUDGED IN THE SUPREME COURT OF THE UNITED STATES, AT JANUARY TERM, 1842. IN WHICH IT WAS DECIDED THAT ALL THE LAWS OF THE SEVERAL STATES RELATIVE TO FUGITIVE SLAVES ARE UNCONSTITUTIONAL AND VOID; AND THAT CONGRESS HAVE THE EXCLUSIVE POWER OF LEGISLATION ON THE SUBJECT OF FUGITIVE SLAVES ESCAPING INTO OTHER STATES 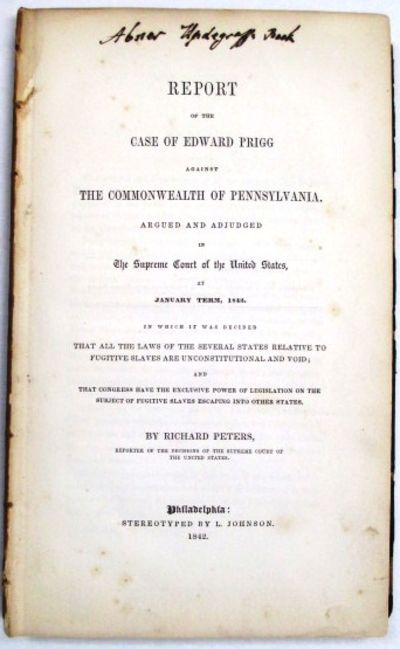 This is the first edition of "the earliest of the three most important Supreme Court decisions on slavery" [Cover, Justice Accused 166] [the others being Dred Scott and Ableman v. Booth]. It is also the first Supreme Court case construing the Constitution's Fugitive Slave Clause [Article IV Section 2], requiring delivery to the master of his slave who had escaped into another State. With the arguments of counsel, it precedes even the official printing, a measure of public excitement. The case "rivals Dred Scott v. Sandford in historical importance" [Fehrenbacker, The Dred Scott Case 43].
Prigg was a Maryland professional slave-catcher. He seized Margaret Moran, an alleged fugitive, in Pennsylvania, and took her back to Maryland. He had not, as required by Pennsylvania law, obtained a State official's Certificate of Removal; indeed, a Pennsylvania court had refused to issue such a Certificate. Pennsylvania indicted him for kidnapping; Maryland extradited him to Pennsylvania, where he was tried and convicted. The issue on appeal was the extent, if any, to which State requirements could alter the Federal constitutional provisions, as elaborated by Congress's Fugitive Slave Act of 1793.
Justice Story wrote the Opinion for the Court, Chief Justice Taney concurring, with only one dissent. The Court held that Congress had exclusive power to regulate the rendition of fugitive slaves. Pennsylvania's additional requirement of a Certificate of Removal was void. The Court also held that slave-catchers had a right of 'self-help': that is, they could seize alleged fugitives without judicial approval. But, the Court held, the federal government lacked power to compel State officials to enforce the Fugitive Slave Act. These disparate conclusions increased already-heightened friction between Slave States-- thus emboldened to pursue self-help-- and Free States, thus encouraged to decline aid to slave-catchers.
Finkelman 61-63. Cohen 13856. LCP 8466. Sabin 61207. (Inventory #: 32643)
$1,250.00 add to cart or Buy Direct from
David M. Lesser, Fine Antiquarian
Share this item
David M. Lesser, Fine Antiquarian Books LLC
Offered by

Burlington, New-Jersey : Printed and Sold by Isaac Collins , 1774
(click for more details about THE HISTORY OF THE RISE, INCREASE AND PROGRESS, OF THE CHRISTIAN PEOPLE CALLED QUAKERS; WITH SEVERAL REMARKABLE OCCURRENCES INTERMIXED. WRITTEN ORIGINALLY IN LOW-DUTCH, AND ALSO TRANSLATED INTO ENGLISH. THE THIRD EDITION, CORRECTED)

VIVE LE CLAY! A NEW WHIG SONG WRITTEN & DEDICATED TO THE WHIGS OF THE UNITED STATES BY SETH H. SWEETZER

Baltimore : Published by F.D. Benteen , 1844
(click for more details about VIVE LE CLAY! A NEW WHIG SONG WRITTEN & DEDICATED TO THE WHIGS OF THE UNITED STATES BY SETH H. SWEETZER)
View all from this seller>