THE CONGRESSIONAL REGISTER; OR, HISTORY OF THE PROCEEDINGS AND DEBATES OF THE FIRST HOUSE OF REPRESENTATIVES OF THE UNITED STATES OF AMERICA. NAMELY, NEW-HAMPSHIRE, MASSACHUSETTS, CONNECTICUT, NEW-YORK, NEW-JERSEY, PENNSYLVANIA, DELAWARE, MARYLAND, VIRGINIA, SOUTH-CAROLINA, AND GEORGIA. BEING THE ELEVEN STATES THAT HAVE RATIFIED THE CONSTITUTION OF THE GOVERNMENT OF THE UNITED STATES. CONTAINING, AN IMPARTIAL ACCOUNT OF THE MOST INTERESTING SPEECHES AND MOTIONS; AND ACCURATE COPIES OF REMARKABLE PAPERS LAID BEFORE AND OFFERED TO THE HOUSE. TAKEN IN SHORT HAND BY THOMAS LLOYD. THE SECOND EDITION. VOLUME II 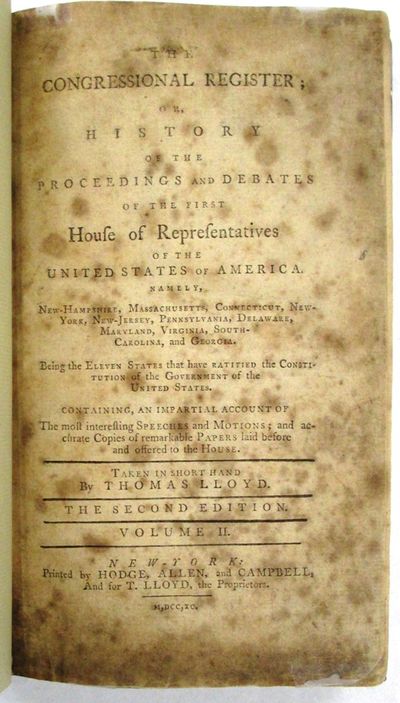 Second edition of the second volume of the Register, originally published in 1789. It was "not an official publication, and was continued only during the sessions of Congress held at New York. In its serial form it ended somewhat abruptly with Number III of Vol. IV," in 1790 [Evans]. The debates printed here include much discussion of the proposed Bill of Rights, with prominent participation by James Madison; the establishment of the Department of State, especially the question of the President's power to remove the Secretary; the settlement of lands, and relations with Indians, in the western territories; compensation of the president, vice-president; and a host of other issues.
Evans 22973. NAIP w030486. (Inventory #: 32393)
$3,000.00 add to cart or Buy Direct from
David M. Lesser, Fine Antiquarian
Share this item
David M. Lesser, Fine Antiquarian Books LLC
Offered by