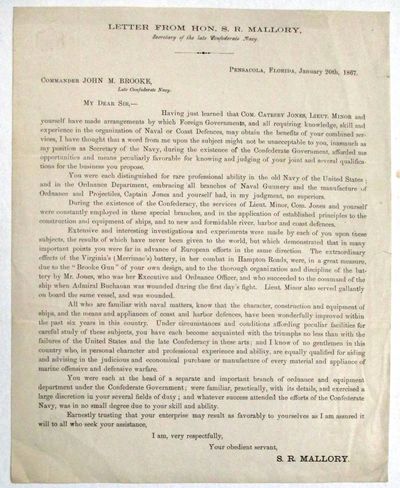 by Mallory, S[tephen] R[ussell]
Pensacola, 1867. One printed page, with integral blank leaf. 4to, signed in type at the end by Mallory. Evidently unrecorded. Very Good.

Formerly United States Senator from Florida and Chair of the Senate Committee on Naval Affairs, Mallory became the Confederacy's Secretary of the Navy. He had long urged the acquisition of Cuba to fulfill the Slave Power's dream of an American slave empire in the Caribbean.
After the Civil War, Mallory was imprisoned for over a year. This printed item, issued soon after he was freed, is a full-page letter of recommendation for former Naval Commanders John M. Brooke and Catesby Jones, and Lieutenant Robert D. Minor. Having learned that they have "made arrangements by which Foreign Governments, and all requiring knowledge, skill and experience in organization of Naval or Coast Defences, may obtain the benefit of your combined services, I have thought that a word from me upon the subject might not be unacceptable to you. ..The extraordinary effects of the Virginia's [Merrimac's] battery, in her combat in Hampton Roads, were, in a great measure, due to the 'Brooke Gun' of your own design, and to the thorough organization and discipline of the battery by Mr. Jones, who was her Executive and Ordnance Officer, and who succeeded to the command of the ship when Admiral Buchanan was wounded... Lieut. Minor also served gallantly on board the same vessel, and was wounded... Whatever success attended the efforts of the Confederate Navy, was in no small degree due to your skill and ability."
We have checked the usual, and not-so-usual sources for a record of this item, and have come up empty-handed.
Not located as of August 2021. (Inventory #: 32512)
$850.00 add to cart or Buy Direct from
David M. Lesser, Fine Antiquarian
Share this item
David M. Lesser, Fine Antiquarian Books LLC
Offered by