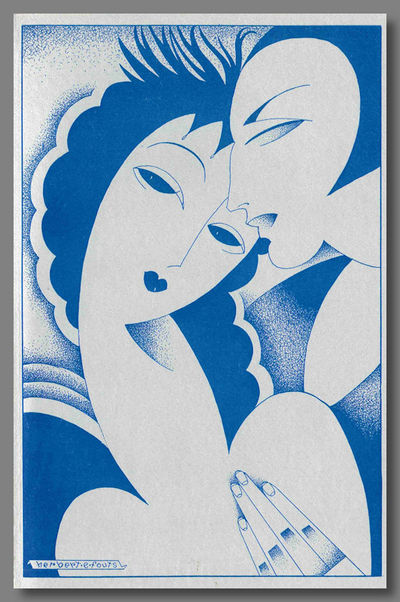 by Fouts, Herbert E. [illus], and Isidora Newman [text]
New York: Henry Harrison, 1927. Large octavo. Silver-gilt blue cloth. Six tipped-in plates. Endsheets a trifle tanned, otherwise near fine, in very good, lightly chipped foil-finish pictorial dust jacket with a few closed edge tears. First edition A collection of relatively ordinary amateur verse by the New Orleans native, coupled with a surprising suite of six tipped-in art-deco plates by Fouts, printed in blue on silver metallic finish paper. Harrison's imprint is usually treated with disdain, due to the considerable load of mediocrity that it preserved between covers, often at the expense of the authors. As a consequence of the artwork alone and the extra cost it must have entailed, this work sticks its head slightly above the Harrison low waterline. Newman comes in for respectful mention in the online Encyclopedia associated with the JEWISH WOMEN'S ARCHIVE, and Fouts appears to have found markets for his work in several arenas, including the sub-rosa world of under-the-counter publications of the 1920s-30s. Uncommon in dust jacket (only). (Inventory #: WRCLIT75401)
$125.00 add to cart or Buy Direct from
William Reese Co. - Literature
Share this item