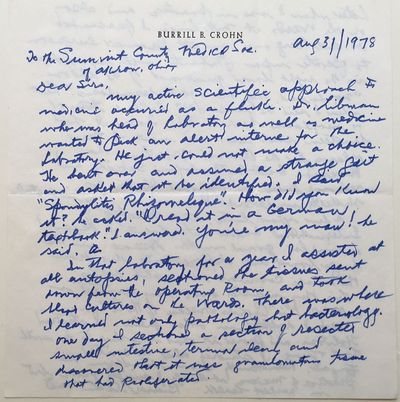 by CROHN, Burrill B. (1884 - 1983)
1978. unbound. 2 pages (front and back) on personal stationery, no place, August 31, 1978. In this letter, Crohn reminisces about how he got started in medicine as an intern for famed physician Emanuel Libman, assisting with autopsies, and his eventual discovery of Crohn's Disease of the Colon, in small part: "...My active scientific approach to medicine occurred as a fluke. Dr. Libman, who was head of the laboratory as well as medicine, wanted to pick an alert intern for the Lab. That is where I learned not only pathology...but bacteriology. Later, on the wards of Mount Sinai I persuaded Dr. Berg, the prominent surgeon, to operate upon patients with symptoms in the right lower quadrant. 'NO, he said, they are all tuberculosis.' But when I said the mass felt like a tumor he relented. Soon I had fourteen such cases and went to New Orleans for the meeting of the American Gastroenterologist Society and read my paper. I was correct - a few year later I presented my findings as a form of Colitis - but the AMA insisted, over my protests, in calling this 'Crohn's Disease.' Fine condition. American gastroenterologist who was the first to discover and describe the disorder that bears his name: Crohn's Disease. (Inventory #: 265896)
$1,000.00 add to cart or Buy Direct from
Argosy Book Store
Share this item