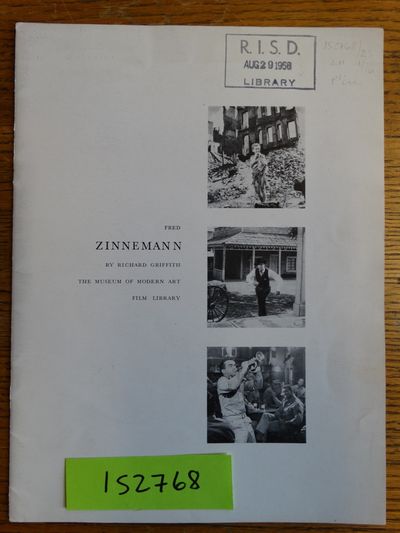 by Griffith, Richard
New York: MoMA, 1958. Softcover. VG, clean, tight contents; covers a tad soiled/shelf-worn, with art school ex-lib. stamp on front cover.. White, stapled wraps with bw images and black lettering. 20 pp. with 7 bw photos. A volume in the MoMA Film Library. Catalogue from the exhibition of March 20 - April 8, 1958, "The Films of Fred Zinnemann," which featured 7 of Zinnemann's well-known films: The Story of Dr. Carver (1938), The Search (1948), The Men (1950), Benjy (1951), Teresa (1951), High Noon (1952), From Here to Eternity (1953), and A Hateful of Rain (1957). With a still from four of the films and a thorough annotation about each which includes production information and personnel, editorial staff, and cast members, along with a synopsis of the story and anecdotes about Zinneman as director. Includes a lengthy introduction about Zinnemann's life by Richard Griffith and an Index to the Films of Fred Zinnemann by Eileen Bowser. With 3 photos of Zinnemann. (Inventory #: 152768)
$29.99 add to cart or Buy Direct from Mullen Books
Share this item