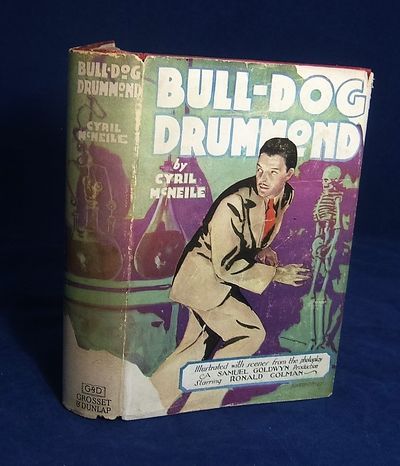 by McNeile, Cyril
New York: Grosset & Dunlap, 1930. McNeile, Cyril. BULL-DOG DRUMMOND. NY: Grosset & Dunlap, (1929). First Photoplay Edition published in tandem with the 1929 Samuel Goldman film adaptation. NEAR FINE copy (one corner bumped, trifle wear) with 4 stills, including frontispiece, from the movie starring Ronald Colman as Bulldog Drummond, bored ex-military man turned detective. In its very scarce ORIGINAL DUST JACKET (tiny bit of chipping to the spine ends, a little soil, a little edge-wear, a touch of fade). INSCRIBED in ink on the front free endpaper to a collector (undated, but most likely in the early 1950s) BY RONALD COLMAN. Bulldog Drummond was not only Ronald Colman's first "talkie" but it was also the movie that allowed audiences to hear his extremely appealing voice and manner of speaking, launching his career as one of the biggest movie stars of the golden age of cinema. Ronald Colman (1891-1958) was nominated for an Oscar for his role in this film, one of four Oscar nominations he received (with one win in 1947 for A Double Life). He starred in such classics as Lost Horizon, Random Harvest, A Tale Of Two Cities, Beau Geste, Under Two Flags, Raffles, Prisoner of Zenda, the list is long and impressive as he was a remarkable talent. Film Source books inscribed by the stars of the film adaptation are of the utmost desirability and rarity. . Signed. First Edition. Near Fine/Very Good. (Inventory #: 001894)
$500.00 add to cart Available from
Lakin & Marley Rare Books
Share this item
Lakin & Marley Rare Books
Offered by

UNDER THE GREENWOOD TREE (Superb Copy of the American First Edition, First Issue in Original Cloth)

New York : Holt & Williams , 1873
(click for more details about UNDER THE GREENWOOD TREE (Superb Copy of the American First Edition, First Issue in Original Cloth))
View all from this seller>