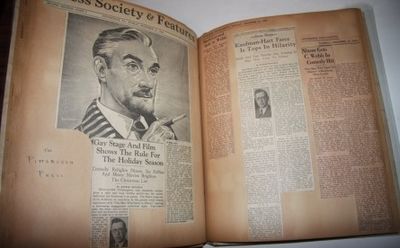 1940-1941. Including a letter and telegram to Webb from his Hollywood agent promising an audition for the part of Sheridan Whiteside in the movie and then letting him down easy because the very bankable Cary Grant is taking the part! Of course, Grant did not ultimately play the part in the Warner Brothers movie, released in 1942, but rather, the inimitable Monty Woolley, who originated the part on Broadway! But Webb's certain disappointment would eventually be salved, one would think, when he was cast as Waldo Lydecker in the 1944 "Laura", a role that bore not a small resemblance to Whiteside, but more sinister! From that debut Webb went onto to star in many movies, playing numerous times Mr. Belvedere, "The Razor's Edge", "Cheaper by the Dozen", etc. Besides the two pieces of correspondence from the agent, the album is comprised of numerous newspaper articles and reviews of Webb in the role as he toured the U.S. in what was the number two cast after the Broadway line-up led by Woolley. Throughout Webb received rave reviews, as did the now classic comedy, and as one would expect, since Webb was playing a role almost tailor-made for his persona, or what was to become his persona -- that of the brittle, sarcastic, biting aesthete. For anyone familiar with the play and Webb, it take little imagination to conjure up him in it, whereas with Cary Grant, the part would have inevitably been turned into something different than its original conception. Lest Webb's being in the secondary cast or his being passed up for the movie part suggests otherwise, Webb had by 1940 already had a long and successful career on Broadway, beginning as a child and becoming a song and dance man opposite the likes of Marilyn Miller, and introducing the song "Easter Parade" in "Thousands Cheer", to cite just one highlight of his prior theater resume. But it was in musicals that he was until then associated, and he had appeared in only a single silent movie, which by then could be entirely discounted. And it was Webb's past and desire to move on to other kinds of roles that are the subject of a good number of the articles pasted into the album. We do not know who compiled the album, which on its "title page" has written in ink above a headshot of Webb "SAM H. HARRIS PRESENTS", but given the presence of the two pieces of correspondence, we think it likely that it was kept by someone close to Webb or the office of Harris, who was a leading theatrical producer of the day. Although we can offer no concrete evidence to support this, we believe the album was made by Webb's mother, with whom the lifelong bachelor Webb lived until she passed away in 1960 at age 91, prompting Noel Coward to remark "It must be terrible to be ophaned at 71." While the album is mostly of newspaper clippings which might be found elsewhere, the assemblage of material would be effortful in the extreme. We believe the value of the album to anyone who is not already a dyed-in-the-wool Webb fanatic is the documenting of a successful show on the road in the early forties and the insights it affords to performance of stage screwball comedies of the day. The album is quite large, measuring 37 by 31 cm, and consisting of 21 leaves. The leatherette of the cover has a few minor chips and rubbing. The paper of the album is heavily aged toned and brittle, as typical of album papers. The first few sheets are loose and also have some edge chipping. (Inventory #: 004673)
$285.00 add to cart Available from
White Fox Rare Books & Antiques
Share this item
White Fox Rare Books and Antiques
Offered by