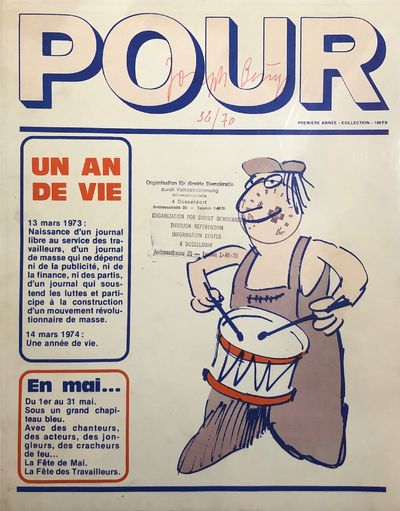 by [Joseph Beuys] Garot, Jean-Claude et al.
Folio (14 x 11 inches; 355 x 280 mm), bound volume in illustrated wrappers (soft cover).
SIGNED and numbered 36/70 by Joseph Beuys on the front cover. A rare collection of the first year of Pour, a radical/anarchist, French-language magazine in Brussels, for 1973-74. Beuys was a supporter of Pour and sometimes raised money on behalf of the magazine, which at first appeared twice monthly and then became a weekly. The cover is stamped in German and English with the contact details for Beuys's organization in Düsseldorf, the Organization for Direct Democracy Through Referendum.

The collection begins with a prospectus, laying out the aims of the magazine as well as details on circulation and financing. That's followed by the 29 issues published during the first year, each containing 8 pages, with the exception of a 16-page special issue.

Pour focused on Belgian politics, strikes, antinuclear actions, prisons, deficiencies in the health system, feminism, outrages by multinational corporations and the media, student and worker life, and much more, often with sarcastic humor. Pour made lavish use of color and featured cartoons and illustrations alongside the texts.

This collection is rare. We find no institutional copies in OCLC nor any other copies in commerce. A fascinating look at Belgian society from a decidedly left-wing viewpoint in the 1970s. RARE.

CONDITION: Some soiling to the wrappers and mild toning to the page edges. Near Fine overall. (Inventory #: 754)
$1,500.00 add to cart Available from Le Bookiniste
Share this item

Hong Kong : [Artmatch Group] , 1997
(click for more details about Artmatch Exhibition '97)
View all from this seller>