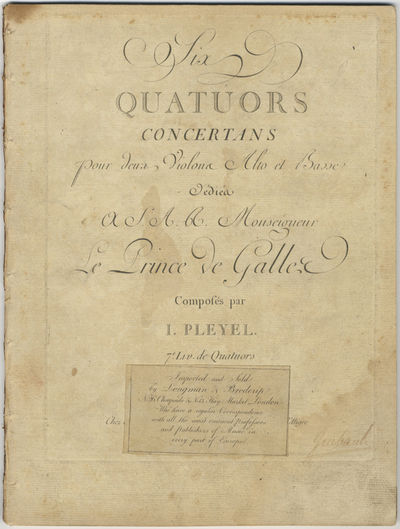 Browned, soiled, and slightly (some pages moderately) foxed; closely trimmed at upper edge, with slight loss to header of Violino primo part; all parts except Violino secondo dampstained at lower outer corner, Viola part also to spine; paper imperfection to final leaf of Basso part. An early edition (the first authorized). Benton 3405. BUC p. 796. RISM P3298 (1 copy one in the U.S., at the Library of Congress). There is another issue by Imbault from the same plates but with plate number 96, believed to be later (Benton 3406; RISM P3299). According to Benton, "some" copies of both issues include the "Avis de l'Editeur." The publisher's catalogue is identical with that in Johanssons's facsimile 37 (1787).

"The enormous popularity of Pleyel's music during his lifetime is reflected in the testimony of contemporary journals and of early writers like Gerber and Fétis. The small town of Nantucket, Massachusetts, then still a whaling port, formed a Pleyel Society in 1822 'to chasten the taste of auditors', according to a newspaper announcement. The most telling evidence of the appeal of his music lies in the thousands of manuscript copies that filled the shelves of archives, libraries, churches, castles and private homes and in the thousands of editions produced in Europe and North America. In quality the works vary greatly, although most show considerable facility and a thorough technical grounding. The earlier works in particular display thematic originality and ingenious developments that make them fresh and attractive. After about 1792 his talent seems to have diminished; his inventiveness waned and he occasionally succumbed to routine procedures." Rita Benton in Grove Music Online. (Inventory #: 25876)
$358.00 add to cart or Buy Direct from
J. & J. Lubrano Music Antiquarians
Share this item

[HWV 289-294; Op. 4]. Six Concertos for the Harpsichord or Organ .. These Six Concertos were Publish'd by Mr. Walsh from my own Copy Corrrected by my Self and to Him only I have given my right therein. George Frideric Handel

London : Printed for I. Walsh , 1750
(click for more details about [HWV 289-294; Op. 4]. Six Concertos for the Harpsichord or Organ .. These Six Concertos were Publish'd by Mr. Walsh from my own Copy Corrrected by my Self and to Him only I have given my right therein. George Frideric Handel)