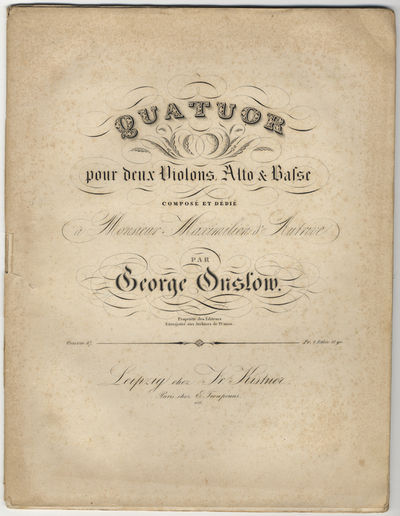 Manuscript titling in blue pencil to initial blank pages of Violino 2o and Alto parts. Measure numbers added in pencil in a modern hand throughout; Violoncello part with passages in violin clef pasted over and rewritten in tenor clef.

Uniformly browned and slightly to moderately foxed; some overpastes partially detached; outer bifolium of Violino 1o.part frayed at spine. An early edition, published shortly after the first. WorldCat (3 copies only in the U.S., at the Free Library of Philadelphia, the University of California, Berkeley and the University of North Texas).

"[A] French composer of English descent... Onslow's string quartets and quintets are the pinnacle of his output. His youthful quartets (opp.4, 8, 9, and 10) are notable for great flexibility of writing, exceptional rhythmic and melodic charm, and great vitality... In 1832 he returned to the form with new and sudden vigour probably as a result of his discovery of Beethoven's late quartets. Both shocked and fascinated by these, he composed the 12 most important of all his quartets (opp.46 to 56) over a period of two years. Of greater density, and with even greater interplay between the voices, these works show great emotional intensity, opening up the way to new harmonic and rhythmic daring, and contain movements of striking beauty. Onslow's work was particularly successful in Germany and Austria throughout the first half of the 19th century, as the many editions of his works show." Viviane Niaux in Grove Music Online. (Inventory #: 25810)
$110.00 add to cart or Buy Direct from
J. & J. Lubrano Music Antiquarians
Share this item