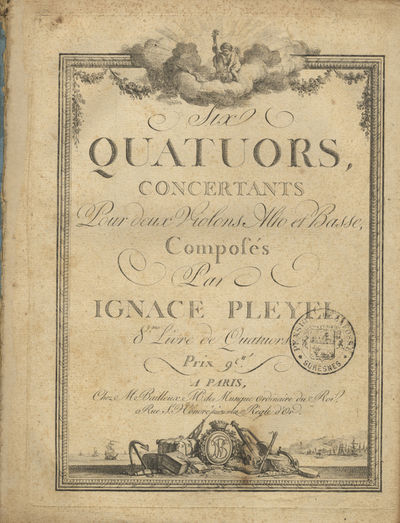 Violino primo: [i] (illustrated title signed "P.N.B."), [ii] (publisher's catalogue), 2-17, [i] (blank) pp.; Violino secondo: [1] (decorative title), 2-17, [i] (blank) pp.; Alto: [1] (decorative title), 2-14 pp.; Basso: [1] (decorative title), 2-14 pp. Engraved. Bailleux is identified on the title as "Md. de Musique Ordinaire du Roi", with the address "Rue St. Honoré à la Règle d'Or." Round handstamp of "Pension Delafosse-Suresnes" to all title pages. Slightly browned, soiled, and foxed, especially title pages; stain to publisher's catalogue of Violino primo part. A very good copy overall. An early edition, published in the same year as first. Benton 3589. RISM P3359 (3 copies, 2 of which are in the U.S., at the University of California, Berkeley, and the University of Iowa). Benton dates the composition of the six quartets to 1792 and tentatively dates the present edition to 1792-1805. Bailleux, however, dropped the "A la Règle d'Or" and the reference to the king from his imprint after 1793, and "rue St-Honoré" was renamed (see Devriès-Lesure I, p. 19). The publisher's catalogue is almost identical with that in the Johansson facsimile 11 (?1786), with some later additions under "Simphonies" and "Quatuors" only; it is thus the latest Bailleux catalogue known to date.

The illustrated title depicts a naval scene in the background with a royal crest with the initials "PNB" and musical instruments and ship's goods in the foreground. "The enormous popularity of Pleyel's music during his lifetime is reflected in the testimony of contemporary journals and of early writers like Gerber and Fétis. The small town of Nantucket, Massachusetts, then still a whaling port, formed a Pleyel Society in 1822 'to chasten the taste of auditors', according to a newspaper announcement. The most telling evidence of the appeal of his music lies in the thousands of manuscript copies that filled the shelves of archives, libraries, churches, castles and private homes and in the thousands of editions produced in Europe and North America. In quality the works vary greatly, although most show considerable facility and a thorough technical grounding. The earlier works in particular display thematic originality and ingenious developments that make them fresh and attractive. After about 1792 his talent seems to have diminished; his inventiveness waned and he occasionally succumbed to routine procedures." Rita Benton in Grove Music Online. (Inventory #: 25851)
$660.00 add to cart or Buy Direct from
J. & J. Lubrano Music Antiquarians
Share this item