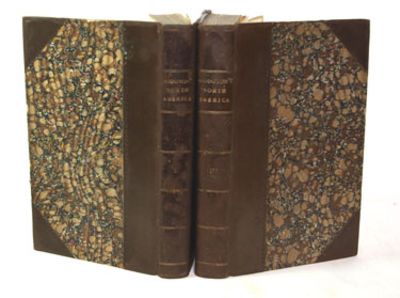 by Hodgson, Adam
London: Hurst, Robinson, & Co.and A. Constable & Co., 1824. First Edition. Both volumes of this two volume set are in very good+ condition in 3/4 leather (calf) and marbled paper covered boards with gilt text and rules on the spines. Both volumes are octavos measuring 8 1/2" by 5 1/8" with rubbing and light wear to the leather around the tips of the boards, at the head and heel of the spines and at the joints. Volume I contains a preface followed by 405 pages which includes an errata on page 405. It is illustrated with a frontispiece map. Volume II contains a fold-out, frontispiece map, 459 pages followed by a tipped-in errata and is illustrated with the aforementioned frontispiece and several engravings of Native American implements and ornaments on pages 442 and 443. With the exception of offsetting from the frontispieces and engravings there is no foxing or tanning present within these two volumes. This is the more complete and revised edition of Hodgson's letters. The earlier version was printed in New York in 1823 and strips much from its content. The author spent eight months traveling through out the eastern states of the US. In the process he wrote 44 letters which are published in these volumes. He arrived in New York City and traveled to Washington DC, Richmond, Norfolk, Raleigh, Fayetteville, Lumberton, Charleston, Savannah, Augusta, Mobile, New Orleans, Natchez, Greenville, Huntsville, Lookout Mountain, Knoxville, visited Jefferson at Monticello, Baltimore, parts of New England and Philadelphia. His main areas of interest were slavery, which he abhorred, and Indian culture, where he had a great interest. Howes considers this set as "quite scarce" and provides "Unbiased observations." (Clark, Vol. 2, 208; Howes, H-560) (Inventory #: TB28287)
$400.00 add to cart Available from
Town's End Books
Share this item

Cleveland and New York : The World Syndicate Publishing Company , 1936
(click for more details about Webster's Universal Dictionary Of The English Language (Volumes 1 & 2))
View all from this seller>