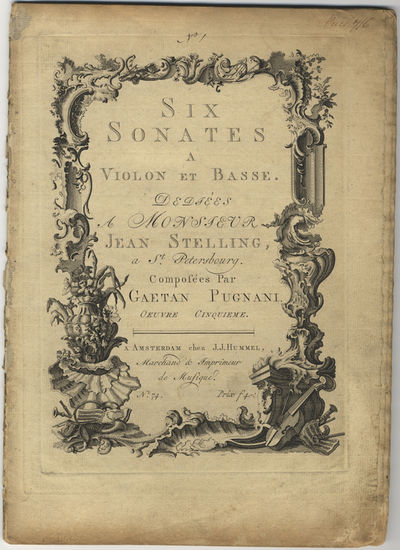 Edges browned and slightly soiled; discolouration to lower right corner. Zschinsky-Troxler 106-111. Not in BUC. RISM P5614 (no copies in North America). WorldCat (2 copies, at the British Library dated 1775, and the Royal Library, The Hague dated 1768). Also published under the opus numbers 6 (Paris editions by Huberty and Frey) and 7 (London edition by Welcker).

Pugnani, an Italian violinist and composer, "was a vital link in the uninterrupted tradition from Corelli to Viotti... His playing was known for its power, eloquence and rich cantilena; his 'arco magno' (grand bowing) became proverbial. He probably played an important part in the development of the modern bow... As a composer Pugnani reached far beyond the violin into the field of opera, symphony and chamber music, and must be considered an important representative of mid-century Italian Classicism... His chamber music stands midway between that of Sammartini and Boccherini... " Boris Schwarz and Marita P. McClymonds in Grove Music Online. (Inventory #: 25837)
$440.00 add to cart or Buy Direct from
J. & J. Lubrano Music Antiquarians
Share this item