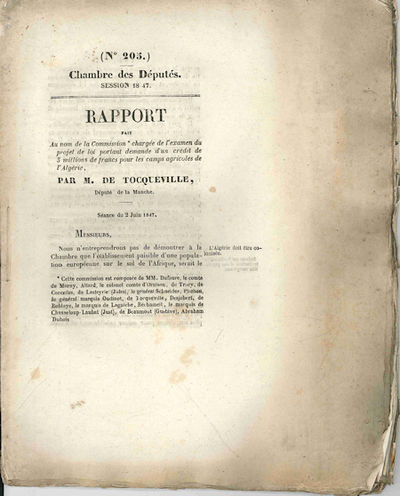 by Tocqueville, Alexis de
[Paris: A. Henry, Imprimeur de la Chambre des Députés, 1847. 43,[1]pp. Large quarto (28 x 22 cm). Sewn self- wrappers, untrimmed. Recto of cover leaf dust soiled, a few faint discolorations to blank margins of terminal leaf, internally crisp and bright. First edition, printed as Doc. "(No. 205.) Chambre des Députés. Session 1847." While the report is printed under Tocqueville's name as Deputy of Manche, the commission included another 15 members, including Tocqueville's close friend, Gustave de Beaumont. At the conclusion of Tocqueville's report, three specific articles relating to the granting of land to soldiers serving in Algeria as well as specific types of appropriations of funds are noted as having been rejected by the commission. An important document in the context of Tocqueville's extensive dealings with the thorny issues surrounding France's extended military subjugation and colonization of Algeria. While OCLC/Worldcat locates a wide range of copies in microfilm or digital form, only one original printed copy of this title is there reported, and that at the BN. However, a copy is cited in Goldsmiths. OCLC: 458323377. GOLDSMITHS 35074. (Inventory #: WRCLIT75425)
$475.00 add to cart or Buy Direct from
William Reese Co. - Literature
Share this item