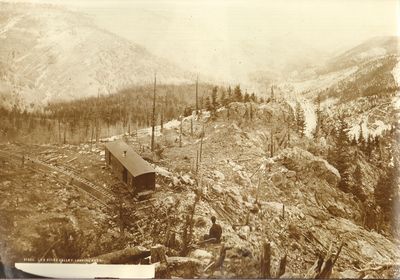 by Jackson, William Henry
Very Good. Image measures 16" x 19 7/8". Light edge wear, with a 1/2" x 6" white spot below the caption, probably from damaged corner of negative plate. Image cropped due to scanner size; more images available upon request. This black and white photograph was developed from the original glass plates of William Henry Jackson, and contains a caption, the number 1023, and the imprint of the Detroit Photographic Company, which bought Jackson's negatives in 1897. Shown are a man sitting in the foreground, a rail car off the tracks, and mountains faintly visible in the background, in the Valley of Los Pinos near the New Mexico-Colorado border. Original plate is circa 1880s. The print was developed from the Colorado Historical Society's glass plate collection circa 1970s by Richard A. Ronzio, a collector of historic Colorado photographs who furnished images for many books on railroads and mining in Colorado. Ronzio also wrote "Silver Images in Colorado." ; . (Inventory #: 010238)
$500.00 add to cart Available from
Back of Beyond Books
Share this item

Rebel of the Colorado - The Saga of Harry Leroy Aleson

Questa, New Mexico : Animist Press , 2019
(click for more details about Rebel of the Colorado - The Saga of Harry Leroy Aleson)

Voyage and Shipwreck of St. Paul with Dissertations on the Life and Writings of St. Luke, and the Ships and Navigation of the Ancients

London : Longmans, Green & Company , 1880
(click for more details about Voyage and Shipwreck of St. Paul with Dissertations on the Life and Writings of St. Luke, and the Ships and Navigation of the Ancients)
View all from this seller>