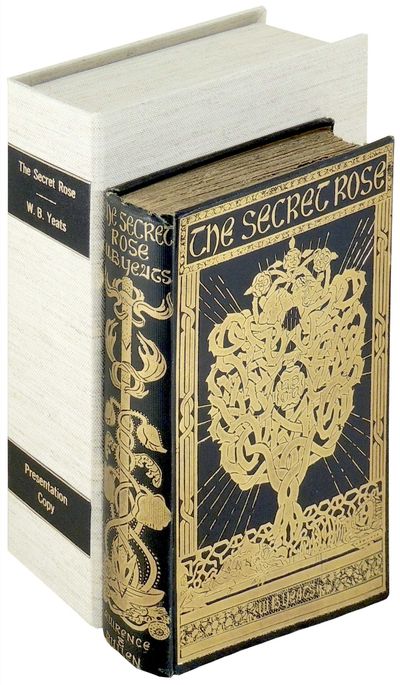 by Yeats, William Butler; Illustrated by John Butler Yeats
London: Lawrence & Bullen, 1897. Hardcover. Near Fine. Hardcover. First Edition. An excellent presentation copy. Inscribed by William Butler Yeats to his friend Clement Shorter: " Clement Shorter from W B Yeats June 23 1899." William Butler Yeats (1865-1939), the famous Irish poet, was one of the most important figures in twentieth century literature. and was key figure in Ireland's nationalist movement. Clement Shorter (1857-1926) was a British journalist and critic who was also an avid collector of books and manuscripts, particularly of the Brontes. He was the editor of the Illustrated London News and in 1893 founded the periodical Sketch. The fourth story in this short story collection, "Where There is Nothing, there is God," was first published in Sketch in October 1896. The stories blend Irish with Rosicrucian themes and characters. Bound in the original blue cloth with the famous cover design done for Yeats by Althea Gyles stamped in gilt on covers and spine. At its center is a four-petalled rose joined to a cross. The boughs of the tree resemble a serpent; among them, just above the rose, are the kissing faces of a man and a woman, With six black and white illustrations by William's father, John Butler Yeats. The binding is bright and beautiful with very slight bumping to corners. Interior pages are quite clean with just a trace of aging to margins. Housed in a cream cloth covered clamshell box with black and gilt title label to spine. Near fine condition. LIT/011816. (Inventory #: 28948)
$10,500.00 add to cart or Buy Direct from
Kelmscott Bookshop
Share this item

London : Jacob Tonson , 1714
(click for more details about An Account of Switzerland Written in the Year 1714)
View all from this seller>