An Apology for the Life of Mr. Colley Cibber, Comedian and Patentee of the Theatre Royal. Written by Himself; and Interspersed with Characters and Anecdotes of his Theatrical Contemporaries; The Whole Forming a Complete History of the Stage for the Space of Forty Years. 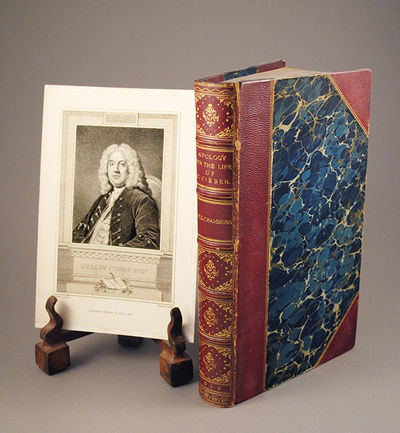 by Cibber, Colley.
8vo. London: Printed for W. Simpkin and R. Marshall, 1822. 8vo, xxiii, 514, vii (index) pp. Half pebbled maroon morocco with blue marbled boards and endpapers, gilt decorated backstrip with 5 raised bands. Binding lightly worn, scattered foxing, faint remains of former owner’s name on recto of frontispiece, very good. Engraved portrait of Cibber loosely inserted. § A new edition, “With many Critical and Explanatory Notices by Edmund Bellchambers”. Autobiography of actor, theatre manager and playwright, Dryden’s nemesis, and poet laureate to the Hanoverian court. Cibber’s Apology is described by one biographer as “smug, self-regarding, and cocksure, but also lively, vigorous, and enormously well informed.” The book is hardly an autobiography in the usual sense (Cibber makes scant mention of his parents, wife, or children), but as a contribution to the history of theatre it is invaluable. As Eric Salmon writes, its many eccentricities “are magnificently offset, if not downright excused, by the one great virtue of the Apology—the accuracy and the prolific detail of Cibber's account of the day-to-day dealings of the English theatre in the first half of the eighteenth century and his descriptions of the actors, the acting, and the physical features of the stages and theatres. On these matters he is an unselfconscious and judicious expert and his book is unrivalled as a source”. (DNB) The Apology went through four editions in Cibber’s lifetime. This is the first edition published after his death, edited by theatrical historian Edmund Bellchambers. (Inventory #: 105609)
$125.00 add to cart or Buy Direct from
John Windle, Bookseller
Share this item