The Fleuron. A Journal of Typography. Edited by Stanley Morison. No. VI. 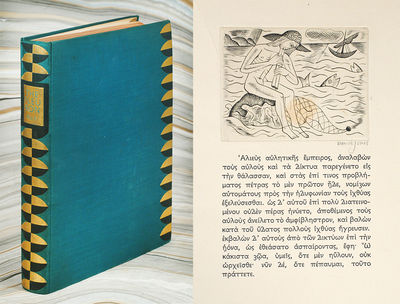 by [Jones, David.] Morison, Stanley.
Cambridge and New York: 1928. Thick 4to, xiii, 264, (1) pp. With 10 plates, 60 line blocks in the text, 6 typographical insets, 3 broadsides, and an 8pp. type specimen printed on pale green paper; many in two or more colors; two original prints by David Jones including one signed in pencil. Original green cloth, black and gold deco stamping on backstrip and fore-edges, a fine copy. § De luxe edition of volume 6 of The Fleuron, surely the most lavish of the periodicals devoted to typography and design. Limited to 160 copies on gorgeous Batchelor Kelmscott paper, "The Fleuron presents the work of the most illustrious typographers, graphic artists, and bibliophiles of the 1920s. Edited by Oliver Simon and later Stanley Morison its contributions covered such subjects as principles of typography, printers' flowers and arabesques, title pages, eminent designers, initial letters, printers' marks, bibliographies, decorated papers, types and printing in Britain, Holland, Czechoslovakia, Italy, America and other countries, and book production. A series on contemporary printers is illustrated with inserts from the printers themselves. Francis Meynell, Holbrook Jackson, and B.H. Newdigate were among the notable contributors." As well as David Jones, of course, whose original engraving on Japon (signed in pencil) is from his extremely rare Fables of Aesop. (Inventory #: 107173)
$1,975.00 add to cart or Buy Direct from
John Windle, Bookseller
Share this item