A Paraphrase on the Book of Job: As likewise on the Songs of Moses, Deborah, David: On Four Select Psalms: Some Chapters of Isaiah, and the Third Chapter of Habakkuk. 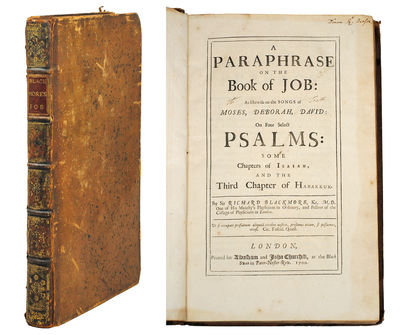 by Blackmore, Sir Richard.
London: Printed for Awnsham and John Churchill, at the Black Swan in Pater-Noster-Row, 1700. Folio, (40), 291 pp. Full contemporary speckled calf, backstrip with five raised bands, compartments decorated in gilt, all edges speckled red. Boards rubbed with several scuffs, joints cracked in places but binding nicely sound and pages only lightly foxed. Signed Tho[mas] Scott on title page. “Donum R. Benson” written in a later hand in upper margin. § First edition. Lowndes describes these metrical translations of the scripture as having “some little merit as poetry, but little as a version of the original text.” (p.211). Richard Blackmore (1654-1729) was a physician and writer who fell foul of both the Royal College of Physicians for his opposition to free dispensaries for the poor, and the London wits for his sanctimonious criticism of contemporary poetry. According to the DNB “Dryden described Blackmore... as a ‘Pedant, Canting Preacher, and a Quack’ who wrote while travelling from patient to patient, ‘to the rumbling of his Coaches Wheels’.” Benson is possibly Robert Hugh Benson (1871-1914), son of the archbishop of Canterbury, convert to Catholicism, and science fiction author. Wing 2641. ESTC R14205. (Inventory #: 105574)
$450.00 add to cart or Buy Direct from
John Windle, Bookseller
Share this item