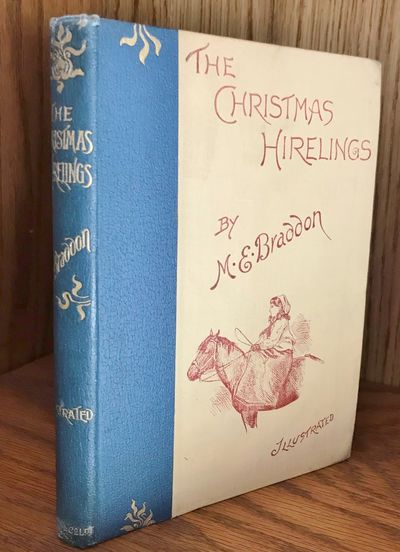 by Braddon, M (ary) E(Lizabeth) M. E.
London: Simpkin, Marshall, 1894. Braddon, M[ary] E[lizabeth]. THE CHRISTMAS HIRELINGS. Illustrated by F. H. Townsend. London: Simpkin, Marshall, Hamilton, Kent & Co., 1894. First Edition in the original pictorial buff linen cloth, decorated blue morocco cloth spine. A few pages carelessly opened, a touch of foxing with the usual offsetting to its endpapers but a NEAR FINE PRESENTATION COPY, inscribed by Miss Braddon in purple ink on a prelim: "To dear Mrs. Guyon with the Author's love & New Year wishes. December 30th 1910." Presentation copies by the famous and ever-underrated author of LADY AUDLEY'S SECRET are indeed uncommon. Robert Lee Wolff, in his comprehensive biography of Braddon described THE CHRISTMAS HIRELINGS "as a genuine Braddonian gem." It is a Christmas story in the Dickensian vein, but the deeply moving sentiment is subtly laced with irony and fierce denunciation of Victorian social codes, a Braddon trademark. The central character is an embittered widower who discovers too late, after reading his dead young wife's diaries, that she married him, not for his money (as he assumed) but for his love. But a threesome of young impoverished "hirelings" initially paid to make Christmas more "family-like" for the old man help redeem him, much as Scrooge is redeemed in A CHRISTMAS CAROL. A lost children's classic, and Braddon's only foray into juvenile fiction, this holiday-inscribed minor masterpiece is much deserving of a place on any Victorian collector's shelves. Sadleir 274. Wolff 631.. Signed by Author. First Edition. Decorative Cloth. Fine. Illus. by F. H. Townsend. (Inventory #: 001901)
$2,000.00 add to cart Available from
Lakin & Marley Rare Books
Share this item
Lakin & Marley Rare Books
Offered by

London : Trubner , 1859
(click for more details about LOVE ME LITTLE, LOVE ME LONG (Original Publisher's Cloth, Two Volumes))
View all from this seller>