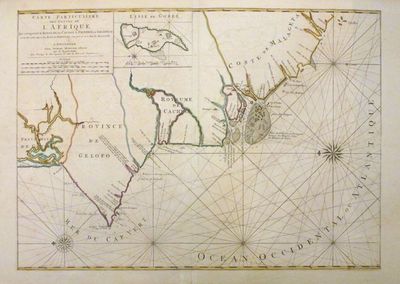 by MORTIER, Pierre
Amsterdam: Pierre Mortier, 1693. unbound. Map. Copper plate engraving with original hand coloring. Image measures 21.5 x 30". This beautiful sea chart of the NW coast of Africa covers from the Senegal River to Palmares (close to modern day Conakry in Guinea). Oriented with north to the left, it includes the whole or parts of the coasts of the modern day nations of Senegal, The Gambia, Guinea-Bissau and Guinea. The sea chart offers striking detail along the coast noting towns, rivers, islands and coastal features including banks and depth soundings. An inset of the Island of Goree (located near Cape Verde) is included with beautifully detailed interior notes Fort Nassau and Fort Orange. At the time, the Island was used as a base for the purchase of slaves from the chiefdoms on the mainland by the Atlantic slave traders. The map is in good condition with large margins. Minor wear along the centerfold with some offsetting and foxing at places. Original pressmark is visible. Minor edge wear with top left corner of the map showing creases - not extending onto printed map. Two sheets joined at center with a horizontal fold along the entire map. Pierre Mortier (1661-1711) was a Dutch cartographer, engraver, and printseller who worked in Amsterdam. He used advanced Dutch printing methods to produce high quality editions of contemporary French maps by cartographers such as De L'Isle, Sanson, Jaillot, de Fer and De Wit. His greatest feat was the nautical atlas "Le Neptune Francois" or "Suite de Neptune Francois", considered to contain the most beautiful examples of cartographic art. Most of the charts from the atlas were based on earlier manuscripts by the Portuguese, who were the first explorers of the African coast. (Inventory #: 265722)
$750.00 add to cart or Buy Direct from
Argosy Book Store
Share this item