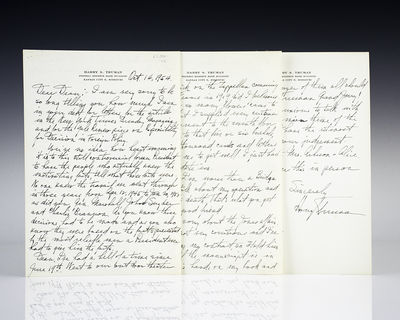 by Truman, Harry S. [Dean Acheson]
Kansas City, Missouri, 1954. Autograph letter signed by Harry S. Truman to Dean Acheson. Five pages, with 2 page transcription of Acheson's 19 October response Truman recounts his near death from an infected gall bladder that required emergency, life-saving surgery, and reflects on his changing popular reputation. "Went to our outdoor theater [on June 19] in Swope Park to see 'Call Me Madam,' which I've never seen (and don't want to)." Truman, in fact, was going to appear in a cameo at the end of the play. But he never made it. While waiting to come on "A pain overtook me which I couldn't stop with all the will power I could exercise and the 'Boss' drove me home." Admitted into the hospital, the "Doc told me that the white corpuscles were increasing at the rate of 1000 an hour and that a little butchering would be necessary. I wrote a codicil to my will and went out - I mean out. They gave me about five or ten gallons of anti-biotics by sticking needles in veins. But they just couldn't kill me." His wife Bess "says I'm worse than a Bridge Club Lady--talk about my operation and bore people to death." He also talks about the difficult task of getting his memoirs published, with an impatient publisher waiting for the promised 300,000 words by the spring of 1954. But the hospital was flooded with flowers during his convalescence and Truman was touched by the genuine concerns expressed for "this still controversial former President." No one, he tells Acheson, "knew the travails of what we went through in those years from Apr. 12, 1945 to Jan. 20, 1953 as did you, Gen. Marshall, [Treasury Secretary] John Snyder and [Secretary of Agriculture] Charlie Brannan." A lengthy, revealing letter about Truman's near death experience. (Inventory #: 7271)
$5,800.00 add to cart or Buy Direct from
Raptis Rare Books
Share this item