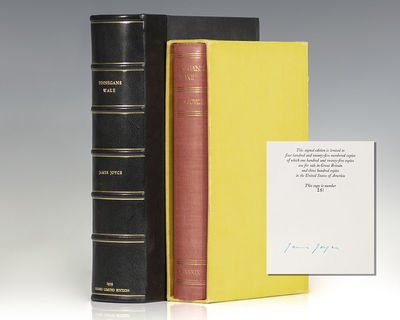 by Joyce, James
London: Faber & Faber, 1939. First signed limited edition, number 251 of only 425 large-paper copies signed by Joyce. Octavo, original red cloth, titles to spine in gilt, top edge gilt, original publisher's yellow cloth slipcase. Signed by James Joyce on the limitation page. In fine condition, with the publishers slipcase. Housed in a custom half morocco clamshell box. A superior example. Joyce began working on Finnegans Wake shortly after the 1922 publication of Ulysses. By 1924 installments of Joyce's new avant-garde work began to appear, in serialized form, in Parisian literary journals transatlantic review and transition, under the title "fragments from Work in Progress". The actual title of the work remained a secret until the book was published in its entirety, on 4 May 1939. The work has assumed a preeminent place in English literature. Anthony Burgess praised the book as "a great comic vision, one of the few books of the world that can make us laugh aloud on nearly every page." Harold Bloom called the book "Joyce's masterpiece", and wrote that "[if] aesthetic merit were ever again to center the canon [Finnegans Wake] would be as close as our chaos could come to the heights of Shakespeare and Dante." Listed by Modern Library as one of the 100 greatest novels of the twentieth century. (Inventory #: 5068)
$14,000.00 add to cart or Buy Direct from
Raptis Rare Books
Share this item