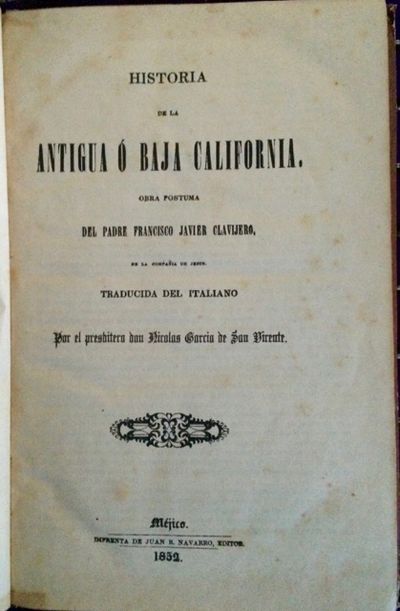 by Clavijero [Clavigero], Francisco Javier and Francisco Palou.
Mejico: Juan Navarro, 1852. First Spanish edition/ Second edition. Large 8vo., title page, [vi], 252, + 3 leaves appendix for both volumes; there are two title pages. Text printed in double columns. (Howes; Cowan, et al.) This is the first printing in Spanish of the first title (Palau lists a previous printing in Italian dated 1789), but the second printing for the second title, the Vida of Serra. This book occasionally appears by itself, at other times with the Vida de Serra included, as in our copy: no priority has been established. In fact, in the introduction by the publisher to the Serra biography, they state that the inclusion of this work, despite it's pious framework, was to complete this history of the Californias, both Lower and Upper. Clavijero (1731 - 87) was expelled from his native land, along with the rest of the Jesuits, in 1767. He settled in Italy, to which is due both of his works, the History of Mexico and this one, to be published first in Italian in Italy, posthumously in 1789 in four volumes. There is still some dispute whether he wrote in Italian or Spanish. His history of Mexico is considered one of the best of the early histories of the subject, fully recognizing the values of the early pre-Conquest civilizations. His history of Baja California contains passages relating to the foundation of the mission at San Francisco, as well as material on Kino, Uriarte, Consag and Salvatierra -- all Jesuit confreres working in those harsh lands of Baja California and the Pimeria, today Arizona. The Palou volume is of course essential reading for the early history of Northern California. This is the second edition of the Vida of Serra. Contemporary Mexican binding, 1/4 leather over orange pebbled boards, some wear to boards but very nice copy, text free of staining and foxing; leather spine with gilt title material and fleurons. On front paste-down is a Mexico City bookseller's ticket: "Se vende en la alacena de Pedro Castro, portal de Mercaderes entrada de la calle de Plateros." Very good copy. (Inventory #: 7385)
$1,000.00 add to cart Available from Plaza Books
Share this item

Manuscript Legal Document Consisting of a lawsuit brought in the case of two haciendas - San Nicolas Tolentino and San Cayetano - and the Mill of Belen in the towns of San Andres and Tepeaca.


<
(click for more details about Manuscript Legal Document Consisting of a lawsuit brought in the case of two haciendas - San Nicolas Tolentino and San Cayetano - and the Mill of Belen in the towns of San Andres and Tepeaca.)
View all from this seller>