THE CHILDREN OF THE SEA 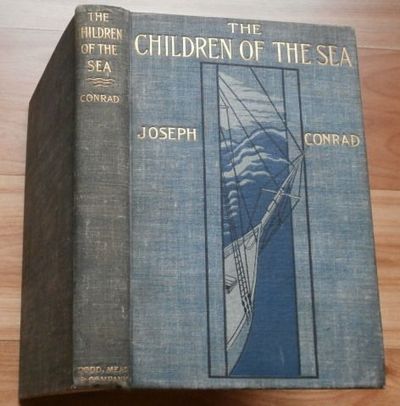 by Conrad, Joseph
1897. A Tale of the Forecastle. New York: Dodd, Mead and Company, 1897. Original pictorial light blue-grey mottled cloth. First Edition, first issue, of the tale subsequently published as THE NIGGER OF THE "NARCISSUS." Conrad wrote this story with the "Nigger" title, but consented to change the title for the American edition (which preceded the English); the publisher's argument was not that the "Nigger" title might be offensive, but rather that the white American book-buying public would not buy the book if they knew it was about a black man. Nonetheless, the original title was restored for all subsequent editions, making this variant-titled edition one of the more sought-after of Conrad's works. In late 1897, Dodd Mead had a first edition of 1000 copies printed; because the book was scheduled for publication late in the fall season, the printers were instructed to print both 1897 and 1898 title pages. The number printed with each date is not recorded... It was re-introduced in the spring and listed in Publisher's Weekly on March 12th among the spring publications... Copies of the spring issue were supplied with the 1898 title page [Cagle]. This copy is from the first issue, with an 1897 title page. It is in near-fine condition (minor cracking of the front endpaper, which also has a partially-erased inscription). This is an increasingly-difficult book to find in collectible condition. Cagle A3b. (Inventory #: 13253)
$875.00 add to cart or Buy Direct from
Sumner & Stillman
Share this item