Journal of the Second Session of the Senate of the United States of America, begun and held at the City of New-York, January 4th, 1790 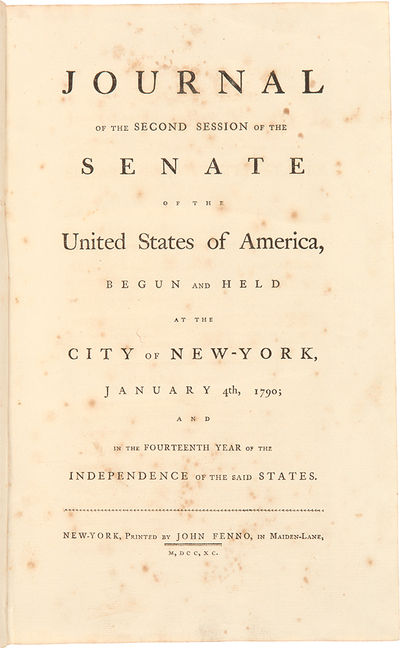 by [UNITED STATES - FIRST CONGRESS]
New York: John Fenno, 1790. 224pp. Folio. Contemporary sheep, gilt leather label. Minor wear. Light scattered foxing. Second issue of the Senate journal of the second session of the first Congress, with the pagination of the two final leaves (pp.222-224) corrected and an errata added. Many important issues were settled in the discussions recorded herein, and many significant moments in the nation's history are treated in depth. Included are George Washington's first State of the Union Message, discussions of state surrender of western lands, notices of ratification of the Bill of Rights, and discussions of questions of the seat of government and Hamilton's fiscal proposals. A highly significant journal describing some of the founding legislation of the United States.