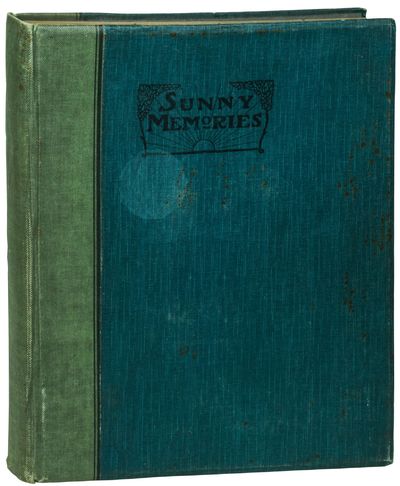 Sydney, Australia, 1914. Hardcover. Near Fine. Folio. Gray and blue cloth boards with "Sunny Memories" on the front board, and 12 stiff card leaves. 125 gelatin silver images mostly approximately 3" x 4", mounted within rectangular or oval frames in the book. All photos with captions or titles on the mounts. A faint spot on the front board, but a very good or better internally clean album with bright about fine images. A very interesting photo album from the family of a high ranking Australian naval officer who resided at Garden Island, base of the Royal Australian Navy in Sydney (now a restricted area). The images include views of Garden Island: streets, the embankment with HMS Pegasus, Signal Hill on the Coronation Day, the interior of the island church, "Idol from Mallo Kollo Island" (Malakula, Vanuatu), "the tree planted by H.M. The King," "swimming bath," and others. Additionally there are a series of views depicting the Garden Island Tennis Club which is considered to be Australia's first lawn tennis court (built in 1880), showing the court itself and tennis court pavilion, group portraits of players shown during games or afterwards, posing with rackets. The album's owner or compiler (here designated as "H.C.") is in several photos, posing in naval uniform in his garden, on board HMS Encounter and on board a naval ship at the beginning of WWI (the last photo is dated November 1914). There are also portraits of (probably) his wife "Ad" and other naval officers and sailors, some designated by last names (Gosling, Baker, S.P.O. Trevin); views of their house and garden on Garden Island (the exterior, interiors of the drawing room and office, images of the front and kitchen gardens). Six interesting group portraits showing "Japanese officers at Garden Island" posing in white uniforms with "Ad" and another lady at the tennis club. Five photos depict the "Tresco" mansion - the official residence of the Naval Officer-in-Command at Garden Island (the exterior and interiors, "swimming bath", a view of the Sydney harbor from Tresco). Three photos show the Bristol biplane in Sydney with the following commentary: "one of two sent arrived Dec. 1910, flew Perth, then Melbourne, then Sydney, c. Feb. 1911." There are also images of numerous ships in Sydney harbor (HMS Fantome, HMS Cambrian, HMS Powerful, HMS Encounter, P&O S.S. Moldavia, HMS Pioneer et al.), Sydney botanical gardens, a series of photos from a trip to the Blue Mountains (Grand Canyon, Grose Valley, Kanimbla Valley, Hydro Majestic Hotel in Medlow Bath, and others). Several photos reveal the album compiler's keenness for golf (images of the Blackheath golf links, the Royal Melbourne golf club and the Royal Sydney Gold club). Overall a very interesting illustration of the social life of Australian naval officers on Garden Island on the threshold of the First World War. "Garden Island, located in Sydney Harbour to the east of the Sydney Harbour Bridge and Circular Quay, has been associated with the defence of Sydney and eventually Australia, since the first fleet of convicts arrived in 1788. Garden Island is thus named because it was here that the crew of HMS Sirius of the First Fleet planted a vegetable garden in late January 1788. Garden Island has had connections with the Navy since the early days of the colony. As well as a garden, it housed a gun emplacement which guarded the passageway between Farm Cove and Pinchgut (Fort Denison) until the construction of Fort Macquarie on Bennelong Point. A similar gun pit was built on Gov. Macquarie's Point, but this was removed after Fort Macquarie was built and no trace of it remains today. In 1811 Gov. Macquarie declared Garden Island a civilian establishment and thus it stayed until 1856 when it was returned to the Royal Navy for use as a base. The base grew in a ramshackle manner with new buildings and facilities being added progressively over the next century. Today it is a restricted area and houses the Fleet Base of the Royal Australian Navy and the Garden Island Dockyard" (Garden Island/sydneyforeveryone.com.au). A fascinating and historically significant album. (Inventory #: 405718)
$3,500.00 add to cart or Buy Direct from
Between the Covers Rare Books
Share this item

Journal of Rehearsals: A Memoir

Durham : Duke University Press , 1977
(click for more details about Journal of Rehearsals: A Memoir)
View all from this seller>