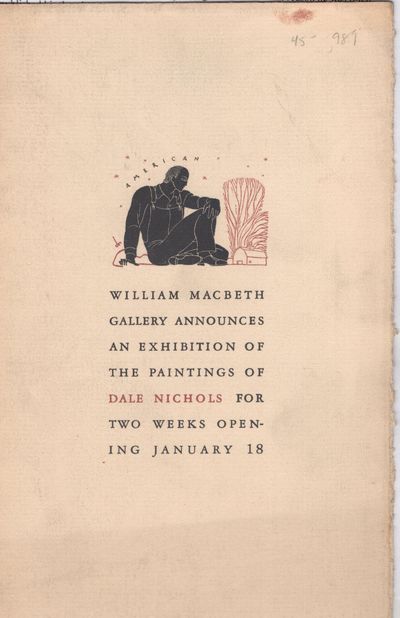 New York: Macbeth Gallery , 1938. Leaflet. Very good. Single leaf of textured paper, folded twice, pp4 with illustration 'American'. With a small essay by Nichols offering short biography. Dale Williams Nichols worked in various mediums including watercolor, oils, and pen and ink. Nichols was a painter, designer, writer, and illustrator, and who rejected modernism for a more realist approach to art. He is best known for his recreations of farm life, often painting Nebraskan landscapes. After moving to Chicago was named the Carnegie Professor of Art at the University of Illinois in 1939. He was an advocate of fine art for commercial purposes, and went against the modernism trend that was occurring during the time. For that reason he was often scorned by art critics. He published his theories on art in his book, A Philosophy of Esthetics, in 1935 recording his belief that art was not composed of rules. He stood against modernism and the unnatural, and was more in favor of the natural rules that dictated art (“Dale Nichols”). He was awarded in 1939 by the Art Institute of Chicago for his painting, The Cold Wave. He won four hundred dollars with his Watson F. Blair purchase prize for the painting, and won over other artists who had conformed to the modernist trend. When the Metropolitan Museum of Art in New York bought his painting The End of the Hunt in 1941 it was further confirmation to Nichols that he was successful even after ignoring the popular trend of his time.In 1943, Nichols became the Art Editor of the Encyclopedia Britannica, following Grant Wood (1891-1942), who was best known for his painting American Gothic. Grant Wood was also one of three judges on the committee for the 1935 prize by the Art Institute of Chicago that Nichols won (Pagano). He would continue this position with the Encyclopedia Britannica until 1948. Nichols was also a member of the Chicago Tribune art staff at one point (Pagano).

"There are no morbid pictures in this exhibition for I have painted none of these. Farming is not morbid to a farmer, and, in saying this I must confess that, if not in fact, at least in spirit, I am still very much a farmer." (Inventory #: 989)
$45.00 add to cart Available from
Little Sages Books
Share this item