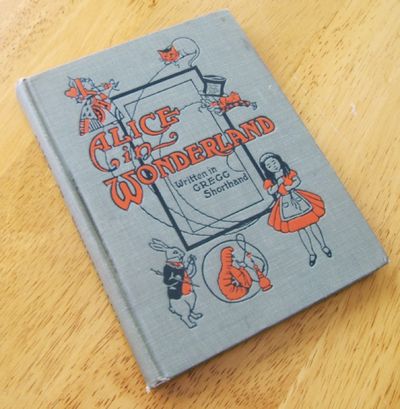 by Carroll, Lewis (Charles L[utwidge] Dodgson)
New York, Boston, Chicago San Francisco, Liverpool: Gregg, 1919. Carroll, Lewis (Georgie Gregg). ALICE IN WONDERLAND. New York, Boston, Chicago, San Francisco, Liverpool: Gregg Publishing Company, n. d. but 1919). First Issue (D-83 on verso of title). Near Fine, bright copy in original pictorial cloth of the "First Shorthand" edition of Alice, plates by Georgie Gregg with partial illustrations by John Tenniel interspersed. Tiny bit of soil to front cover (very minimal), no previous ownership inscriptions. The 1919 true first edition, first issue has "D83" appearing as the printer's code on the reverse side of the title page. This is no 1915 edition (as per Lovett & Lovett) given every edition with printer's code "D83" lists the Boston Gregg Publishing Company Office on the title page and the Boston Office didn't open until 1919! In May 1926, an identical hardback version of "Alice in Wonderland" in Gregg Shorthand was published and is identical to the 1919 "D83" hardback version with two exceptions. The list of Gregg Publishing Company Offices on the title page was updated to remove Liverpool (closed in late 1920) and to add London (opened in late 1920). Also, the new printer's code "E-59-F-25" appeared on the reverse side of the title page. Scarce in collector's condition. . First Thus. Decorative Cloth. Near Fine. Illus. by John Tenniel. Private Press. (Inventory #: 002014)
$200.00 add to cart Available from
Lakin & Marley Rare Books
Share this item
Lakin & Marley Rare Books
Offered by