The Asphalt Campus: Monotremata of the Academe 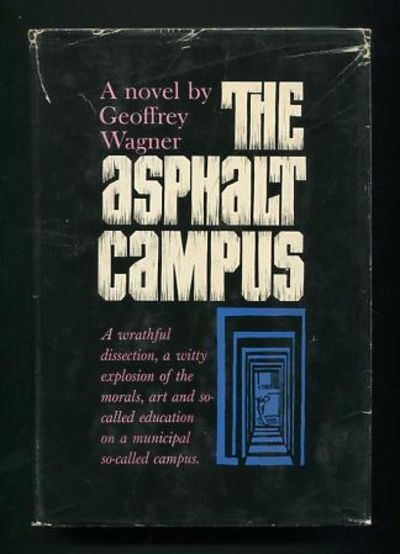 by Wagner, Geoffrey
New York/London: The Macmillan Company. Very Good+ in Very Good dj. (c.1963). First Edition. Hardcover. NOISBN . (price-clipped, although price remains visible) [good sound copy, moderate shelfwear to bottom edge; jacket shows some wear at spine ends, one-inch diagonal closed tear at top left corner of front panel, with associated wrinkling/creasing across top edge of front panel, also small closed tears at both top corners of rear panel]. Scarce novel set on the campus of the fictional "Lincoln College, purveyor of education to the vast multitudes of New York City's youth, the people with the unpronounceable names and the flat pocketbooks, who flow in daily by subway." The story, a tract against the technological orientation of the city's municipal colleges, revolves around the abrupt removal of a popular veteran English Lit professor from his classroom for "conduct unbecoming," and the subsequent efforts of some of his associates and students to get him reinstated. Kirkus Reviews called it "a wild burlesque of the more ridiculous aspects of the educational apparatus," also observing that "the publishing world, congressional investigating committees, moviemakers, homosexuals, gossip columnists, pacifists, [and] beatniks all get their due." Another critic praised the author (an Englishman) for having "caught the poetry of the 'cool'," and described the voice of the novel as "energetically rhetorical, grotesquely gay, and angry in the manner of Wyndham Lewis." . (Inventory #: 21008)
$100.00 add to cart Available from ReadInk
Share this item
ReadInk
Offered by