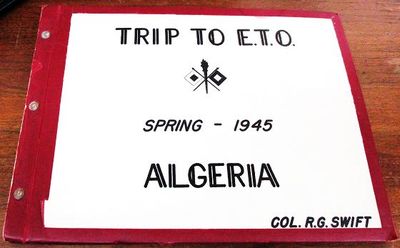 by Algeria
1945. Original photograph album. Original Cloth. Very Good. This album contains 67 high-quality b/w photographs, 41 taken by Col. Swift, the remainder taken by Col. Jay D.B. Lattin. Swift's photos are two sizes: the smaller, numbering 34 shots, with images measuring approx. 3 ¼" or 3 ½" by 5 ¼" or 5 ½"; and the larger, numbering 7 shots, measuring approx. 6" x 8 ½". Col. Lattin's photos are approx. 4 ½" x 3 ½" or 5 ¾" x 9 ½". Of the 67 images, 45 depict scenes in Algiers, Algeria (41 taken by Swift, 4 by Lattin). The remaining shots (all Lattin's) include scenes in Marseilles, Montargis, and Toulon. All photographs are labeled in Swift's very precise printing by hand. The album also contains originals, and some copies, of documents relating to Swift's postings April-May, 1945, Also present are two maps: folded map of Paris and the Metro system, and a one-page map of London and its Underground stops, along with a small four-page booklet on the Cumberland Hotel in that city. The physical album measures 11" x 14", post-bound white cloth bordered by red tape, and contains 50 pages. The album was created by Col. Robert Gray Swift, Signal Corps, with a hand-printed cover reading: "Trip to E.T.O./ [Signal Corps insignia]/ Spring-1945/ Algeria/ Col. R.G.Swift". All lettering throughout the album is in Swift's precise, draughtsman-like hand. Col. Swift (a "Lt. Col." in the earlier documents) was serving at the Central Signal Corps School at Camp Crowder, MO, when he and Col. Jay D.B. Lattin, (HQ, Second Service, Command, Governor's Island, NY) were ordered to report to Washington prior to being sent to Paris for 30 days to survey training installations there and to recommend improvements. (Document #1, April 10, 1945). On April 25, Swift receives a document (printed in French and English and accomplished by hand) signed by French General Merlin, (Chief Signal Officer of Ground Air and Naval Forces), "honouring him for his services" and authorizing Swift to wear the French Signal Corps insignia (Document #2). On May 2, 1945, Swift receives orders to go from E.T.O. Headquarters to Algiers for 10 days, along with Col. Hattin and Lt. Col. Paul Gilbert Raymond of the French Army (Document #3). The terms of Document #1 are then extended by 15 days (Document #4, May 16, 1945). On May 27, Swfit is ordered to London for 7 days (Document #5), and on May 30, (Document #6) he receives notification from the E.T.O. office that he is indeed authorized to wear the French insignia bestowed on him in Document #2. ~~ The photographs Swift takes in Algiers include highly evocative glimpses of the native populations in the streets and at the Casbah and public market, well as shots of French and American military personnel. Photos include birds-eye views, the mosque used as an air raid shelter, the King George Hotel (which was "Gen. Eisenhower's North African HQ"), the French Signal School, the Governor General's Palace and its guards, the "harbour", the Church of Notre Dame, ruins of an old Roman temple near the city, and the Christian Martyr's Tomb and its "keeper". Personnel at the French Signal School and French Radio Intercept Station are seen: two "Merlinettes" (i.e. women "pigeoneers" holding their birds), and Lt. Touche and other staff including two "French WACS". Three photographs document "Arab soldiers entertaining their military "guests" at an outdoor feast of pit-roasted lamb and side dishes. Lattin's five views of Algiers include the French Signal School and its staff, along with a mosque and worshippers. Of Col. Lattin's other photos, 6 were taken at the Montargis Signal School and include "German P.W.s", the School buildings and staff officers "at the officers' chateau", and a shot of Swift, Col. Raymond and the School Commandant together. Seven views taken in "Marsailles" (Marseille) include street scenes, Notre Dame church, the waterfront, and candids of the officers, including Le Man and Raymond. Also seen are two views of the waterfront at Toulons showing bombed buildings, and two of a "Mediterranean waterfront" en route from Marseille to Cannes. (Inventory #: 037938)
$375.00 add to cart or Buy Direct from R & A Petrilla
Share this item
R & A Petrilla, Antiquarian Booksellers
Offered by

Specializing in Antiquarian books and documeents in various fields, especially Americana and Travel. .We have been buying, selling & appraising printed matter and manuscripts since 1970.

Orders are packed and shipped from our business offices in the village of Roosevelt, New Jersey, USA . Packages are dispatched as quickly and economically as we can manage, via the shipping method that you selectAll items are guaranteed to be as described. Any item may be returned within ten (10) days of receipt if found to be other than as described. Please give us advance notice of any return. A returned item must reach us in the same condition as when we shipped it. Original binding, text block, bookplates and any inserted material must be intact.
More from this seller

TWO POEMS BY FRANCIS MEYNELL. First printed for his Seventieth Birthday by His Friends, SM, BC, VR, DC, RS, JD. 12 May 1961. [Presentation copy]