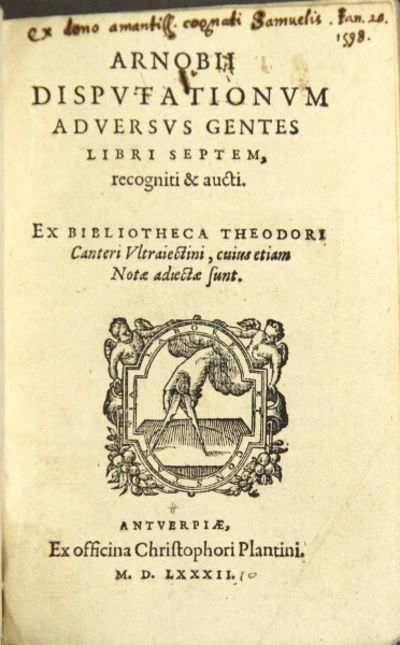 by Arnobius, of Sicca
Antwerpiae: Ex officina Christophori Plantiti, 1582. 8vo, pp. 285, [3]; woodcut device on title page, woodcut initials and decorations throughout; the final leaf is blank; contemporary full limp vellum, turned-in edges, 19th- or 20th-century manuscript titling on spine; while the textblock is sound, the vellum covers are almost loose. At the top of the title in a 16th-century hand: "Ex dono amantiss. cognati Samuelis. Ian. 20. 1598." The first 45 pages contain a number of early underlinings and annotations in the margins. "The seven Libri adversus gentes ... are a detailed attack on ancient paganism ... The work of Arnobius was for the first time edited by Faustus Sabaeus and printed in Rome, Franciscus Priscianensis, 1542. In his Lectori S. the editor of the Plantanian publication, Theodorus Canterus, explains that he followed this edition..." Adams A-1996; BM-STC Dutch and Flemish, 1470-1600, p. 14; Voet 596. (Inventory #: 48677)
$862.50 add to cart or Buy Direct from
Rulon-Miller Books
Share this item