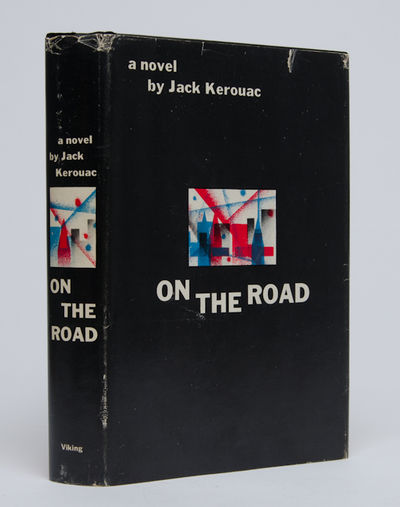 by Kerouac, Jack
New York: The Viking Press, 1957. First edition. Fine/Very Good +. A Fine copy of the book; original black cloth with white lettering on the spine and front board; red topstain. A previous owner's name on the front endpaper, otherwise untouched. In a Very Good + dust jacket that shows some dampstaining on the verso, one longer tear on the rear flap fold and a couple shorter tears and some wear at the top of the spine. "It changed my life like it changed everyone else's," Bob Dylan said of "On The Road." Jack Kerouac's classic Roman A Clef, published in 1957, was the defining work of the beat generation. It follows the travels of Sal Paradise, a stand in for Kerouac himself, and is based on a series of journeys Kerouac took from 1947 to 1950. The work was typed up on a continuous "scroll" of sheets that Kerouac had taped together. "On The Road" appears on both Modern Library's list of the 100 best novels of the century and on Time Magazine list of the 100 best English language novels from 1923-2005. "[I]ts publication is a historic occasion... the most beautifully executed, the clearest and the most important utterance yet made by the generation Kerouac himself named years ago as 'beat,' and whose principal avatar he is." (Contemporary New York Times review). Fine in Very Good + dust jacket. (Inventory #: 1586)
$3,500.00 add to cart or Buy Direct from
Whitmore Rare Books
Share this item

London : T. Cadell in the Strand , 1775
(click for more details about The Morality of Shakespeare's Drama Illustrated (Association copy))

Caste: A Story of Republican Equality

Boston : Phillips, Sampson & Company , 1856
(click for more details about Caste: A Story of Republican Equality)
View all from this seller>