Three large format (13" x 17") original art Harold Talburt illustrations; Depression/New Deal/WWII Era - Who Says You Can't Take It With You?'; 'Now Junior - Don't Get Papa Started On That!'; 'But It All Hangs On That!" 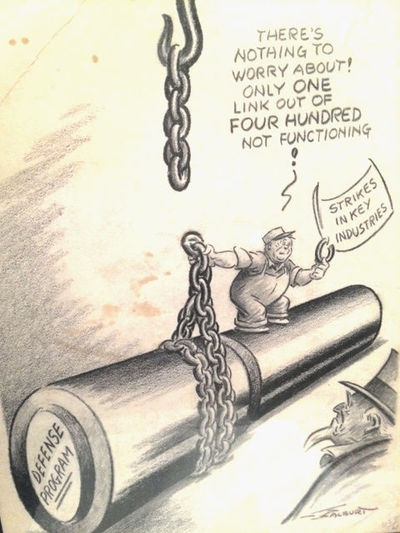 n.p., 1938. First Edition. Card. Good. Harold M. Talburt . Who Says You Can't Take It With You?' -Depicts various caricatures 'candidates' toting bags, bushels and wheelbarrows of 'public funds', with 'To The Campaign' directional sign. Signed, with Last Use stamp of August 15, 1938. Staining (brown and areas of pink ink) and loss to edges. 'Now Junior - Don't Get Papa Started On That!' - Depicts a circus tent with a tax collector doling out tickets, while 'Congress' police figure lifts tent for free entry to 'tax exempt securities and official salaries', while onlooking child asks "How Come We Have to Pay if They Don't Have to Pay?" Signed with Last Use stamp of May 25, 1938. Small area of staining, edges intact.'But It All Hangs On That!" Depicts Uncle Sam looking on as large scale construction hook, attempting to hoist 'defense program' steel or concrete pillar, is defeated by a broken link. Worker holding broken link 'strikes in key industries' thinks to self, 'There's nothing to worry about! Only one link out of four hundred not functioning!' Late Time Use stamp of March 6, 1941, with faded intake stamp of 1940. Staining and some loss to rims.

Harold M. Talburt (1895-1966) a a Pulizer prize winning American editorial cartoonist, member of the National Press Club and the White House Correspondents Association. He was president of the Gridiron Club in 1947. The Pulitzer Prize was awarded to Talburt for his 1933 Washington Daily News cartoon, "The Light of Asia". Talburt’s work was published in two books: Talburt (1943) and Cartoons: Largely Political (circa 1943). (Inventory #: 1079)
$500.00 add to cart Available from
Little Sages Books
Share this item