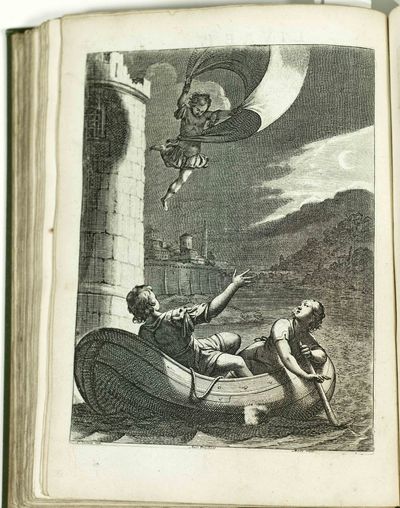 Filly illustrated with an engraving before each chapter and one penultimate engraving. [p. 770], plus an added engraved, illustrated t.p.). The first edition was published 1632, octavo with one illustration (Brunet II, 633; Tchemerzine II, 817).

The eighteen engravings that illustrate the work are in remarkable condition with deep contrasts and fine detail. 1 As H. Gaston Hall notes, the two printings of this, the second, edition are important, because although the "early success of Ariane is implicit…in the quarto editions of 1639 and 1643… because authorship is acknowledged on the title page…the quality of the quarto editions further implies an enhanced status for the novelist….The lavish illustrations of the quarto Ariane must have enhanced the status of the novel altogether." The book is written in the manner of d'Urfe's more famous Astrée, to which it is indebted for themes, narrative techniques, atmosphere, and elements of characterization" (Hall, 110).

Set amidst Nero's persecution of Christians in 1st century Rome, two boys from Syracus, Mélinte and Palméde, visit Rome where they fall in love with two girls: Mélinte with Ariane and Palméde with her maid Épicharis. Introduced as a slave belonging to Ariane, Épicharis proves to be the long-lost sister of the hero Mélinte. Meanwhile Mélinte's friend Palméde proves to be Ariane's lost brother and has, as a result, stature enough to marry Épicharis, whom he loves all along. The progress of the two couples are allegories of redemption. Resurrection is an important theme, as "resurrection from a false report of death foreshadows felicity through recovery identity, enhanced status, forgiveness and reconciliation. Through successive disguises and progressive discoveries the lovers of both sexes prove their constancy. Providence is revealed for the triumphant denouement" (111-113).

The author Jean Desmarets de Saint-Sorlin was a French poet, dramatist, and novelist, who was born and died in Paris. Early in life he held various offices at court, such as counsellor of the king and secretary of the marine in the Levant. He became a member of the salon of the Hôtel de Rambouillet, and contributed the well-known verses on the violet for the "Guirlande de Julie." Later, he became a member of the French Academy and its first chancellor.

As details of the various editions witness, the fortune of Ariane was considerable both in France and abroad until the end of the century of Louis XIV. La Fontaine, for example, declared that that plot was very good: Statistically, there were some ten or more editions L'Ariane in French between 1632-51, and a total of at least ten editions of various translations into English, German, Dutch, 3 and Flemish between 1636 and 1714. Ariane was also a popular source for dramatists between the years 1635-1651;

Lancaster notes that it served as source material for the following: Nicolas-Marc Desfontaines tragicomedy Eur'midon ou l'illustre pirate (1637); From chapters IX, XIV, XVI: Mairet, L'Illustre Corsaire; Tristan L'Hermite, La Mort de Sénèque (ca. 1644); and perhaps, Racine's Andromaque (1667). Also, it is the source for a Dutch 18th-century play: De Gewaande Ariane, of de Bedrieger door list bedrogen (Amsterdam: H. Bosch, 1718). Just as scenes from novels find their way into movies, so did scenes from the 17th century find their way into art. Enlarged reproductions from Vignon's illustrations were woven into Aubusson tapestries; scenes from the novel were rendered on furniture, including the important "Cabinet d'Ariane" now at Windsor Castle

It should be mentioned that the last chapter of Ariane features a scene in which there is a near execution of Mélinte by means of cutting out his heart. Hall provides a half-dozen comparisons to show this has nothing to do with the setting of the novel in 1st century Rome, but rather "corresponds…closely to practices of the Aztecs, Toltecs, and other Indians encountered by Europeans in Mexico" (116). Also, the illustration on p.182 (frontis to Chapter V) provides the first illustration in print of a parachute.*

*"The history of parachutes may date as far back as far as medieval times. Early parachute-like devices may have been used for stunts to entertain guests at court ceremonials in China as long ago as the 12th century. In Italy in 1483, Leonardo da Vinci imagined a design for what we would now call a parachute in a sketch in the margin of one of his notebooks. The design consisted of sealed linen cloth held open by a pyramid of wooden poles about seven metres long" (BPA).