12 Engravings of Sets from the Amsterdam Schouwburg "the most famous of all Schouwburg illustrations, 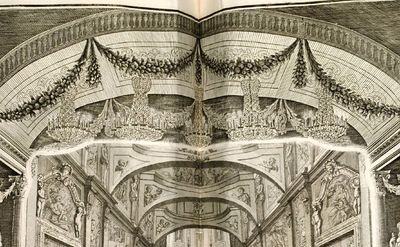 Twelve engravings are printed with a passe-partout frame (3). No title page. It is unclearif the series ever had a title page, since none of institutional holders of the individual printsor the complete sets identifies the series by title.

In this album, there are two additional engravings published by Smit, but without engraved frames:

Like movie palaces of the 20th century, theatres of the 18th century were beautiful structures that attracted tourists and enchanted habitués. These theatres were illustrated in guide books, included in histories of their city and—as in Amsterdam—made the subject of fine engravings and etchings, to be sold singly or in albums. As well as the outside façade of the theatres, the insides, and especially the scenery and costumes of characters,were the subject of fine engravings.

The first Schouwburg theatre (1637) began a tradition of publishing series of illustrations about itself (Gascoigne, World, 185). In 1664, the original structure was demolished and a new one built on the same site, constructed "in the Italian style as used in Venice" (188).The second Schouwburg burned down in 1772, with some loss of life and a renewed call by the Puritans to ban theatres altogether.

Of the several attempts to commemorate the second Schouwburg, the Smit series of twelve engravings is the most important because of its accuracy. Gascoigne says the Smit engravings are "the most famous of all Schouwburg illustrations, the magnificent series of thirteen etchings of the theatre's scene published by J. Smit between 1738 and1772….[These provide] details from which one could recreate each Schouwburg setting precisely in terms of its separate wings, borders and backcloths….And this was accuracy beyond the call of necessity….Smit presents twelve of the Schouwburg scenes in their entirety exactly as they were first created, each one a complete and unified setting in itself"(Gascoigne, Shuffling, 98).

Unlike modern theatre scenery, in the early-modern periods sets were expensive and bulky.Rather than make new sets, the originals were modified to suit the present play in the repertoire. It was generally accepted that with about a dozen complete settings a theatre was equipped for all contingencies.

"The most impressive series of such etchings—and probably the greatest of all theatrical prints from any period—are the thirteen views of Schouwburg settings published between1738 and 1772 [including the Smith engraving without passe-partout De Nieuwe Hofzaal].All these prints show the same precise awareness of each separate wing in every setting….Only a few of the prints were colored…even the colouring seems to have been done with the same conscientious accuracy" (Gascoigne, World, 190). Smit's series constitute an iconographical record of a major theatre almost as complete as the record of Swedish scenery at Drottningholm, which was preserved from the 18th century andpublished in an atlas in the 1930s.(3)

While early-modern Dutch theatre is not highly studied today, perhaps because its national playwrights adopted the themes and strengths of French theatre, it was extremely important in its time, because of its close relation to other centers of culture in Western Europe.Dutch theatre in general and the Schouwburg in particular was influenced by and in turn influenced other national theatres of the period. French, Italian, English, and German influences appear on the Schouwburg stage. In the 18th century, "Italianate" scenery with its elaborate machinery came into use. Also in the 18th century, Dutch drama "was succumbing to the influence of French classical tragedy" (Hartnoll, 683) as well as to the French sentimental tragedie bourgeoise.

Conversely, early-modern Dutch theatre, which had its origin in the late 16th century, influenced English and German theatre, and preceded French theatre developments. For example, the concept of a triumphal arch (taken from royal processions) used in the early Dutch stage probably had some influence on the Elizabethan stage. Overall, "Dutch theatre reflects all the important developments in European staging between the 16th and 18th centuries," and "recorded them in painting and etchings with unparalleled completeness sand accuracy" (Gascoigne, World, 179).(4)

1. These Smit engravings were manufactured in different groups at different times between 1738-1760, and also published in 1770-1772. Ours dates from the first group, if we can depend on the distinction made by Brandt: "The passe-partout varies for the two series. The first one engraved before 1742 by N. van der Laanafter Hendrik de Leth, shows elaborate chandeliers and festoons hanging in the proscenium arch. The other has simple candelabra, a larger orchestra pit and adifferent audience; it dates from approx. 1770 and was sketched and engraved bySimon Fokke" (425).

Since Smit was involved in other publishing projects at the time, he is known for other Schouwburg prints without the frames, such as #14 in this album, and also those for a production in 1768 of Demophontes, and those for the derivative series of Schouwburg studies created to commemorate the second theatre that had burned: Atlas van de Waereldberoemde Koopstad Amsterdam. Engravings by N. vanFrankendaal after W. Writs (1772-74).5

3. Passé-partout: literally "cut out." The proscenium stage with a view of the audienceis made in one plate to create a frame. This frame surrounds a scenery "medallion"plate that is changed to show another scene. The title and a four-line verse are alsoprinted on a third, separate plate.