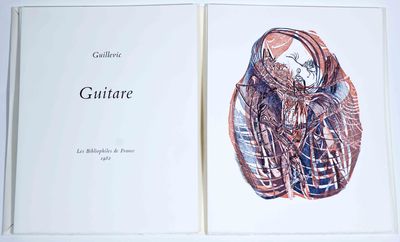 Gérard Blanchet is a member of several generations of engravers who took over the studio of the famed Jacques Beltrand. In 1947, engraver printer Robert Blanchet Jacques joined the atelier Beltrand and in 1952 took over that studio. Already at that date, there was a relationship with poets and artists of his time: Saint-John Perse, Guillevic, Béalu, Giono, Dorgelčs ... Picasso, Singier, Villon, Lorjou, Clave, Debré . In 1965 engraver Gérard Blanchett with his father in the development and printing of books with new poets and artists including Seghers, Guillevic, Butor, Lurçat Trémois, Lorjou and others. (Inventory #: 1274)
$750.00 add to cart Available from Golden Legend
Share this item
Golden Legend, Inc.
Offered by