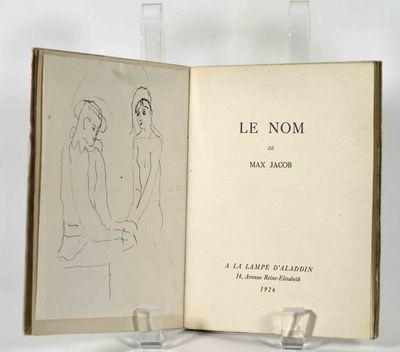 “Painter René Rimbert mentioned in a letter to Jacob that if his expected child were to be a girl, hewould name her Saskia after Rembrandts’s young wife. In his answer Jacob pointed out that Saskiais not a Christian name and that it is important not to subject a child to lifelong ridicule. Thisexchange of letters gave him the impetus to write the charming story.” (P.188 Black & Green).The story concerns a girl who is named Saskia much against her mother’s wishes. The inscriptionreflects Jacob’s intention of writing a playful parable for a young person “What better processes todelight the father than to love his children.”

Jacob’s influence on modern French poetry was profound, and his modernist lyrical verse is stillwidely read. Encyclopedia Britannica notes of Jacob: [he] “played a decisive role in the newdirections of modern poetry during the early part of the 20th century. His “novels,” mainlyepistolary, are exercises in verbal mimicry, reproducing every nuance in the conversation of the petitbourgeois,of whom he was a sardonic but affectionate observer [as in Le Nom]. He influenced manyof his contemporaries and toward the end of his life was surrounded by a devoted group of youngerand older artists.”