Three ALS on personal letterhead, program, and signed, dedicated photograph from Wright Lorimer to Estelle Carpenter of San Francisco and her two daughters. 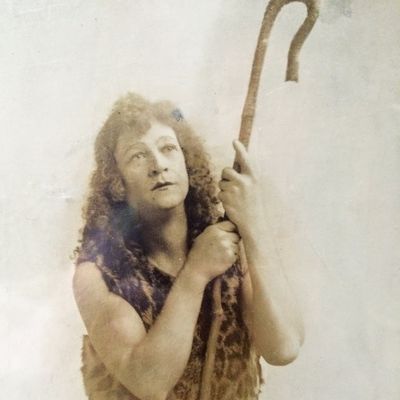 by Wright Lorimer
San Francisco: Wright Lorimer , 1909. First Edition. Letter. Very good. Walter M. S. [Myron Smith] Lowell, American stage actor and playwright, author of famous religious play The Shepherd King and star of the Broadway production (playing David). Lorimer, a Colgate College (Massachusetts) graduate, Oxford post-grad, Dearborn Stock Company of Chicago theatre member, then surprisingly: Pennsylvania baptist preacher, marriage and a gig as a poultry farmer ..then 15-year old Zelda ran away with him in Michigan, all that before the iconic role of King David. Six years plus, the nation loved him and his stardom rose. After wide notoriety, a vaudeville crestfall and the absence of a follow-up chapter of success, he committed suicide at the age of 38 years, by putting his head in the gas oven of a boarding house kitchen on 124 West Sixty-fifth Street .His personal letterhead reads: Grasp Thine Opportunities, showing a hand grasping three arrows. Three letters from what likely are hotels in Northern California, wherein he writes to Estelle Carpenter, Decemeber 14, 1909, 777 Turk St., San Francisco: 'My Dear Miss Carpenter' after visiting her unusual and welcoming home. You must know that I see many homes in a season of travel, homes where money has been spent with a lavish hand - some arranged with an artistic taste, some crowded with valuable decorations with so little sense that one is uncomfortable - but your home! The memory of the sweet odor - the quiet - the presence of the spirit of something unnameable but most satisfying will long linger in my memory. He offers her a box at the Garrick Theatre (program laid in), invites her to come, perhaps closing night, and fill it with friends. (To Estelle Carpenter, Q of H) January 3, 1910, Sacramento: To The Carpenters: My own dear friends, just a line to tell you how I miss you and wish I could run in to dinner. The memory of your loving kindness is sweeter than all the flowers that grow in all the gardens of California and your home is 'Sunshine" even in stormy weather. Jan 10-15th I shall be in Los Angeles and hope to have a line from each of you. Writes of manager/advance man. He is no longer producing the Shepard King and wishes to be own manager again - 'Write to me Estelle - Edith and mother - I want to hear from you. Yours Always, Wright Larimer." May 8, 1910: My Dear Estelle Carpenter: Hello! Did you get my booklets. I am home at work with a crew of masons on my open air theatre. Have lots of applications for pupils but cannot take then until I get dormitory completed. Hope you and mother and sister are welll. Had a fine season through the middle west and south. My whole heart and soul are in my plan to present great Biblical Plays in my open air theatre. Write to me to address.. "I love you all three." [underscored]. Yours ever, Wright. P.O. Box 216, Rockaway, New Jersey.  Photograph shows Lorimer costumed for the Good Shepard, a 6 x 11 matted on 15 x 10-1/2, December 17, 1909. "This picture of me as 'David' is presented to my Dear friends Mrs. Carpenter and her two daughers in memory of one of the most delightful visits of my memory. Wright Lorimer". Loss to mat, with chipped border and split along signature. Estelle Carpenter served as Supervisor of Music for San Francisco Public Schools from 1897 to 1945. Known as that "dynamo in skirts," she inspired generations of school children to "breathe deeply," An active member of many musical societies in California and nationwide, it was under her guidance that the school system initiated one of the most innovative and thorough musical programs in the nation. Her papers are held at the California Historical Society.