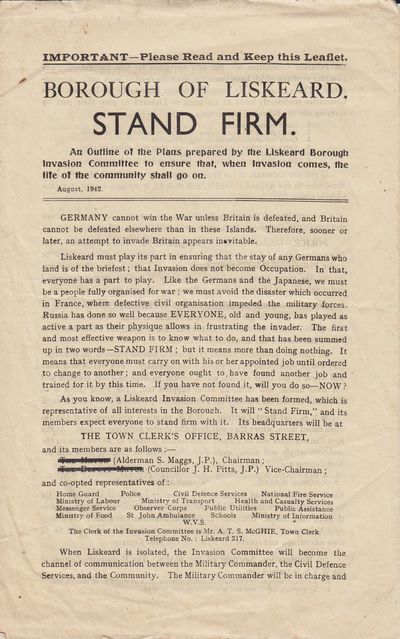 Ephemera
Ephemera. Very Good. 8vo 8" - 9" tall; Borough of Liskeard. Stand Firm. [Liskeard, Cornwall]: Liskeard Borough Invasion Committee, 1942. 10" x 6 ¼" folded. Single sheet of letterpress, folded to create four pages. Very good: light wear, creasing and soiling. Lisekard is a small town in the southwestern corner of the United Kingdom, about 15 miles from the English Channel. This pamphlet addresses what its invasion committee believed to be a high likelihood of an invasion by German ground forces. Following in the footsteps of "Keep Calm and Carry On" the committee insisted that the exercise of its motto, "STAND FIRM" could prevent an invasion from becoming an occupation. In addition to encouraging all citizens to find roles in the repulsion of a German attack, it sets out rules in case the town is isolated ("don't get on the roads unless on duty-to disobey this is suicide") as well as how various city services, such as the distribution of food, would function in case of invasion. A stirring appeal to a civil population fearing a German invasion. No copies on OCLC. (Inventory #: 466)
$150.00 add to cart or Buy Direct from
Langdon Manor Books
Share this item