World Divided Into the Torrid Zone, the Temperate & Frigid Zones, Both North & South 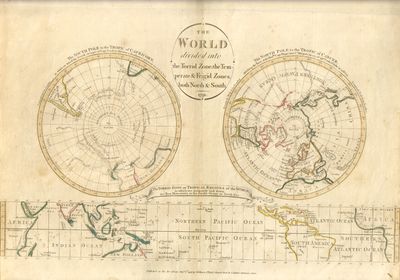 London: I. Johnson & C. Stalker. Very Good. 1791. Map. A sheet with three hand-colored maps, one each of the hemispheres with the poles at the center and one equatorial Mercator projection of the tropics. Map has some tears up to an inch, light soil with one dampstain spot, and edge toning. The Sandwich Islands are shown and a Southern Ice Ocean is labeled at the South Pole. Australia is labeled New Holland although the British claim to the eastern half is marked by a different border coloring. Titles are "The South Pole to the Tropic of Capricorn, in which are traced the several attempts of Capt. Cook to discover a Southern Continent in 1773, 74, & 75", "The North Pole to the Tropic of Cancer, describing the tracts of the Honble. Capt. Phipps (now Ld. Mulgrave) in 1775 & Capts. Cook & Clerke in 1778 & 1779", and "The Torrid Zone or Tropical Regions of the World, in which are accurately laid down the New Discoveries in the Pacific Ocean or South Sea." I. Johnson listed on the imprint may be a misprint, probably British mapmaker Joseph Johnson. Rare, with only one copy located on OCLC. ; 14" x 17" . (Inventory #: 011658eye)
$400.00 add to cart Available from
Back of Beyond Books
Share this item

1844
(click for more details about Lettersheet, Announcement and Bill from Haslucks & Co. Saddlery Ware, New York City 1844)
View all from this seller>